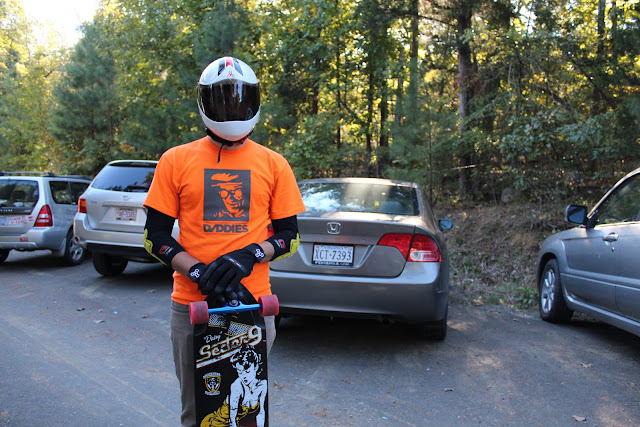 There are few things as important as skating safe and Triple 8 is no stranger to keeping us all safe, making everything from helmets to hip protection. If you get yourself geared up with all that Triple 8 has to offer you will have a shred friendly suit of armor on your side! Especially with one of the newest additions to the Triple 8 lineup, the Racer Downhill Helmet. 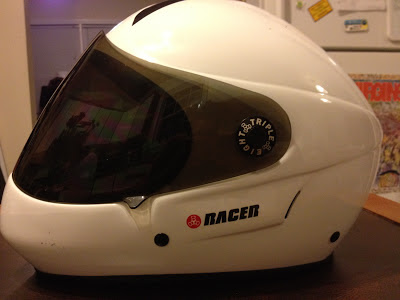 The Triple 8 Racer is designed for competitive level racing and to keep you and your brain in one piece after taking a spill. Most half shells (regular helmets) offer more than enough protection for you daily skate endeavors, however, when it comes to serious speed many people desire a little more protection. Which in all honestly is always a good idea.

I have never attempted a helmet review before, but decided to go all out with a full face review thanks to Triple 8! Now I know what you're all thinking.... "Wayne, if you're reviewing a helmet does that mean that you intentionally fell down?" Well the short answer is yes and no. Now I didn't go out and just fall down every run to see if my head was protected, but there was definitely some time spent off my wheels but on the pavement.

Normally I review a product in what I consider to the 4 main types of riding you will encounter on a longboard, however, because a full face helmet like the Triple 8 Racer is certainly not intended for commuting or freestyle I am not going to dedicate entire sections of the review to them.

Freeride
The Triple 8 Racer is an interesting helmet to freeride in. I think the biggest reason I like it when trying to hit some slides is that it actually gives me a little confidence boost. I know that most people who skate probably are either university students or live with their parents. In both cases, odds are, that you have health insurance and if you ever get into a skate accident can see a doctor to get you fixed right up. I, unfortunately, am uninsured and will be for the next few months so having the right gear is not just an good idea for me, but a necessity. 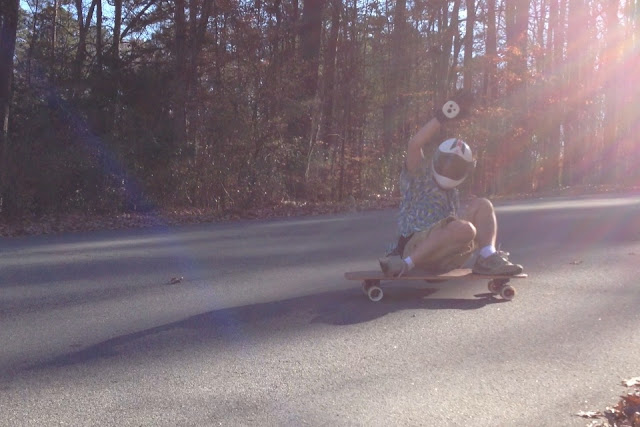 I know that when I am wearing this helmet I am not running the risk of damaging not only my brain, but my beautiful face! So I can step my freeride game up a notch or two and go for slides at faster speeds and try and steeze them out longer and longer.

I was worried that having a full face on would make freeride more difficult or that it would restrict the range of motion in my neck. However, I was pleasantly surprised to discover that the Racer was pretty light on its feet for such a large helmet. I can still bend every which way and my line of sight is not incredibly narrowed. 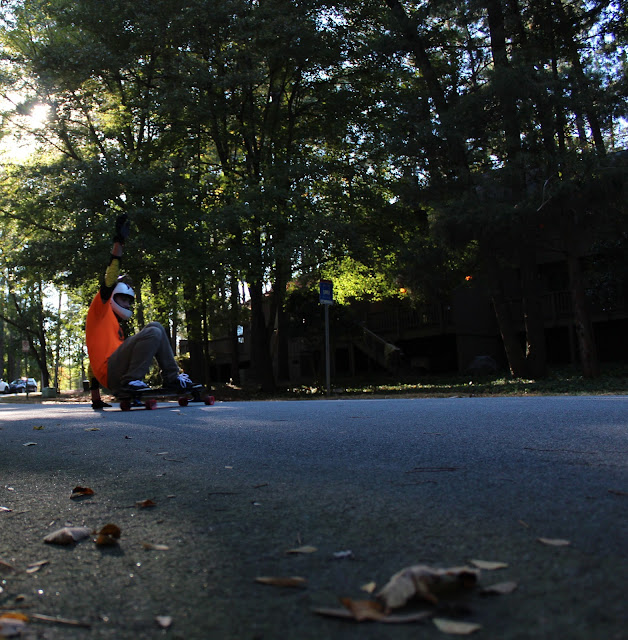 One of the downsides to the Racer when freeriding the day away is that it can get pretty hot. This isn't as much of an issue in the wonderful fall or winter weather we have been having lately. However, the more gnarly I get the sweatier my head gets in this helmet. Which I don't think is necessarily a fault of the Triple 8 Racer specifically but of all full face helmets. The other big thing is that, while I was surprised at how nimble it is, a full face is still pretty heavy to lug up and down the hill a bunch of times on top of your head. 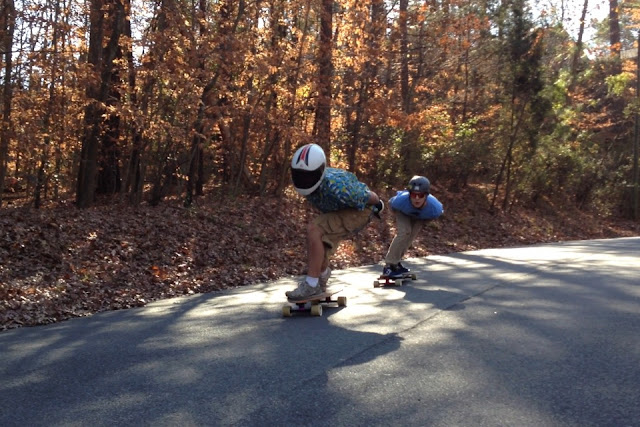 This is obviously the type of riding the Triple 8 Racer was meant for. That confidence boost I mentioned earlier for freeride is present 10 fold when you are flying down a hill.

I live in Chapel Hill, NC and while the hills here aren't as big as over in the nearby mountains, they can still get pretty fast. I have taken this helmet to my personal top speeds of between 40-45mph and I can tell you one thing for sure, when I am tearing through a sketchy scenario going fast I really, really, really... really like having the Racer on my head and not a half shell. 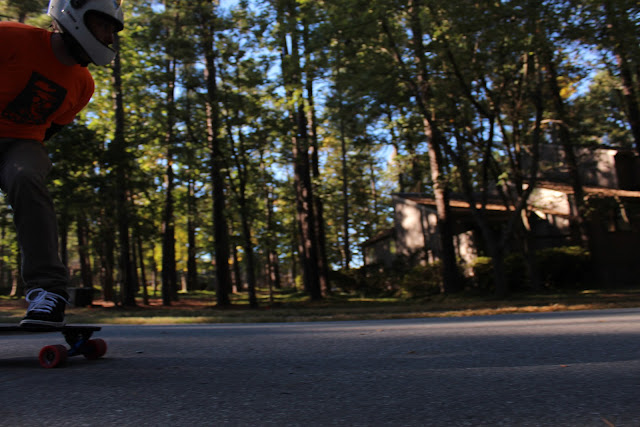 Another super nice feature offered by the Racer, you know aside from saving lives, is the visor. The visor on the Racer I have been rocking is tinted, which is great for sunny days and keeps the wind from getting me all teary eyed when I'm ripping down a run at full speed. A lot of people don't like tinted visors because they feel it prohibits them skating when it's not sunny out. Well, in my opinion, if you are going fast enough to need a full face on your head then you should probably only be skating that fast when you have plenty of day light. However, for those people who don't think along the same lines, you can always pop your visor up or pick up a clear visor through Triple 8.

I have taken my fair share of spills going super fast and luckily they are generally backwards onto my back and butt and not onto my face. However, I always think about the chance of hitting a weird bump or a rock and pitching forward onto my face, in which case I know that my Racer will keep me nice and safe, and my smile will remain intact, haha. I have only taken one serious fall on my face in this helmet, and I can hardly call it serious because I as totally fine afterwards. 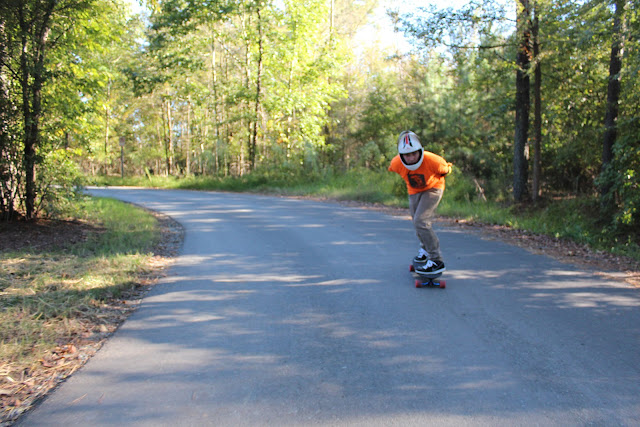 It Can't All Be Good
While I think that Triple 8 has produced an awesome helmet with the Racer nothing is perfect. The biggest downsides I see to this helmet are not necessarily product specific, but downsides to most full face helmets in general. This helmet is heavy, you don't want to wear to do flip tricks or to commute around town. Besides, if you did you would look like a total kook, haha. But the weight can get a little annoying in freeride after your 80th walk up a hill.
The other thing I noticed was that I could fog my visor up if I was breathing super hard. I don't want you to think that it always fogs up, but when I tried to fog it, I definitely could. Which is not really something you want to happen when going really fast, but fortunately you generally aren't breathing like a train when downhilling. Mostly because when hauling ass, yes it is a test of physical endurance, but it is not as labor intensive as flip tricks and won't get your breath going as fast.

The Bottom Line
Would I recommend the Triple 8 Racer full face helmet to a friend?
I wouldn't recommend this helmet to just anyone on a longboard, but I would recommend to anyone who likes to go fast. I don't mean like 15-25mph fast I mean at or above 40mph. There is no way to express how important having the right gear on is when attaining such speeds.

After riding in the Triple 8 Racer as much as I have lately I know that I cannot go back to downhilling in my half shell helmet. This thing keeps the wind out of my eyes, gives me sunglasses (with the tinted visor), increases my confidence, and keeps me safe. I think that Triple 8 has nailed it with their downhill helmet and that anyone with a mind to get into racing or who just knows they need a full face helmet should look into the Racer.