Tuesdays are for Skating Every Day -- Tiger Tuesday Review 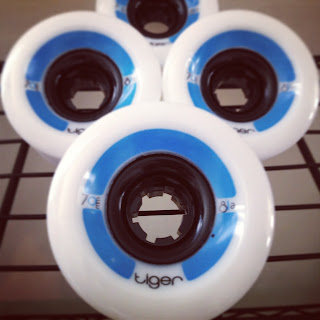 I was stoked to be granted the opportunity to check out a new wheel on the market, Tiger Tuesdays, a wheel created by the crew over at Tiger Skate Designs. In case you haven't heard of Tiger Skate Designs let me fill you in a little bit. Tiger started out making slide pucks a year or so back and only recently delved into the world of wheels. Tuesdays are their first attempt at a wheel and Tiger obviously decided to center it around a pretty popular riding style, freeride. 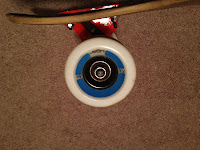 Let me hit you with some technical specifications on Tiger Tuesdays real quick. Tuesdays are a 70mm wheels with a 37.5mm contact patch. The core of the wheel is 36mm and sits at a nice sideset. They come in one durometer, albeit a pretty atypical one, with a hardness of 81a. Tiger Tuesdays also arrive with a nice pre-ground surface for smooth slides as soon as you get them. 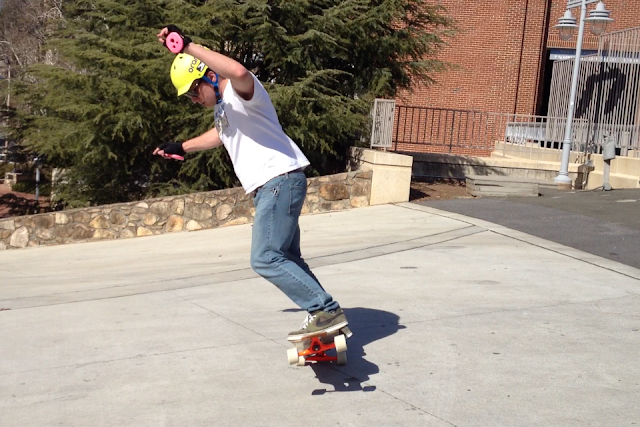 I took Tuesdays with me for every type of riding of I can think of and then some, haha. Now let me answer the question on all of your minds... How do Tiger Tuesdays handle when you're going hard in the paint?

Commute
When you have a wheel that comes in at 70mm it basically means you are going to get a nice balance between roll speed and weight. Tiger Tuesdays do not disappoint in this balance. For those of you reading one of my reviews for the first time let me tell you a little secret. I commute on my board a lot. I'm not talking just a skate to and from a few buildings on campus... I spend at least a solid 40 minutes a day pushing to and from work.
Tuesdays are a pretty solid wheel to hit the streets with. They get up to speed pretty quickly and don't shed that speed easily. In addition, being relatively narrow makes them pretty light too, which is of course nice if you have to really push for a long time. I definitely enjoy rocking my Tuesdays on my pushing setup, however, they haven't stayed there. They move have shifted to a more appropriate setup.

Downhill
To be perfectly frank, you aren't going to see anyone winning the world's biggest races on Tiger Tuesdays. Tuesdays just don't have the shape for it. 70mm wheels are definitely large enough to get you going and going fast as hell, but a larger wheel with a little more momentum will obviously get you slightly faster. I have taken my Tuesdays on some of my favorite downhill runs and found them to have at least a couple nice attribute for going fast. 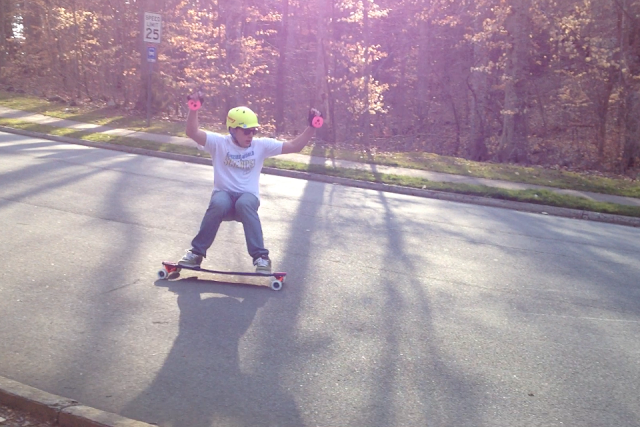 The first of which is that, for a slide wheel and being pre-ground, Tuesdays do not break out into a slide when you're not ready for it. Don't get me wrong, these wheels beg to be drifted, but as long as you are not flying into a 90 degree turn at 45 mph they should hold a line pretty well. Additionally, while 70mm wheels, like Tuesdays, do not have the highest max speed, they accelerate quickly. Which translates to a nice transition between drifts and getting back up to speed.

Freestyle
I know that Tiger Tuesdays were not really designed as a freestyle specific wheel, but damn are they good at it. Tuesdays are light, have a freestyle friendly contact patch, and a urethane formula that lends itself to kicking out into a quick slide or two. 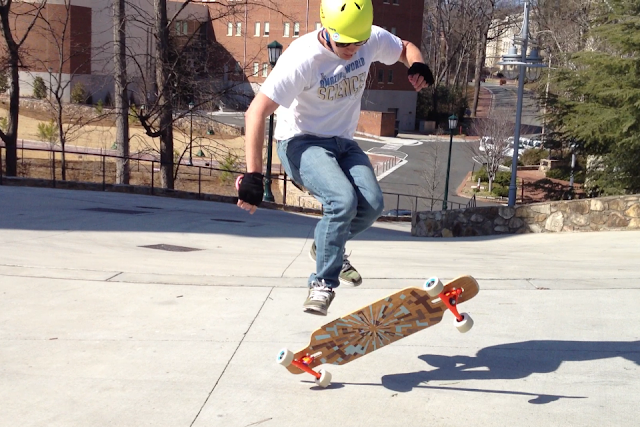 I have been riding some pretty heavy setups lately but decided to slap my Tuesdays on something nice and light. I set them up on my Tantien for some freestyley goodness and it was fantastic. I know that flexy boards have fallen out of vogue in the community, but they are a ton of fun and the Tuesdays make the board all the more awesome. The entire setup was super light so my flip tricks and my early grabs were easy squeezy. 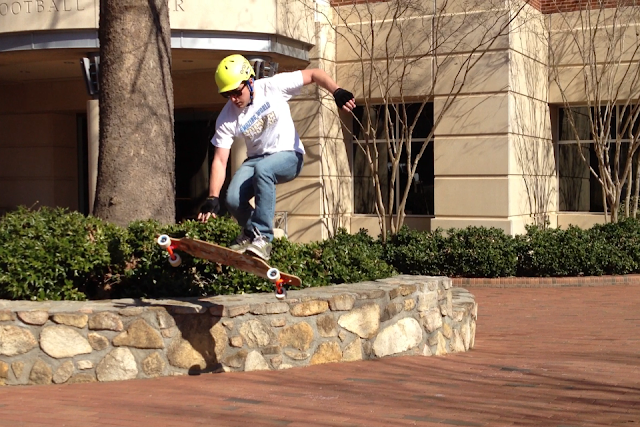 In addition to contributing to a super light setup Tuesdays are great for freestyle because they can kick out into a slide without a problem. I mentioned that they grip a little downhilling, but if you put a little umph into your board the payback is a nice quick slide.

Freeride
Tuesdays are definitely a good all around wheel but I know for a fact that they were constructed to slide.... and slide well. I have only just started holding out big boy standies (and by that I mean like 25 feet on a good day) and I have been hitting all those big slides on my Tuesdays. 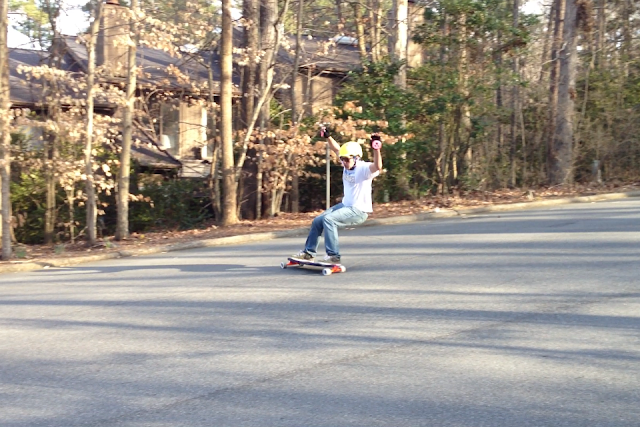 I have been hitting the slide game real hard on my Tuesdays and they have held up to the beating like a champ. I have been working on the biggest slides I can muster on these wheels and they have worn surprisingly well. Normally when you ride a wheel that drops thane all over the place, like Tuesdays do, you expect them to wear worse than a piece of chalk. However throughout their life I have encountered no flat spots, no ovals, no uneven wear pattern at all and yet these wheels actually dump urethane when they slide. I think I might have to attribute this to the 36mm wide core in Tuesdays. The large core (relative to the 37.5mm contact patch) doesn't allow the lips of the wheel to deform into weird shapes while sliding. 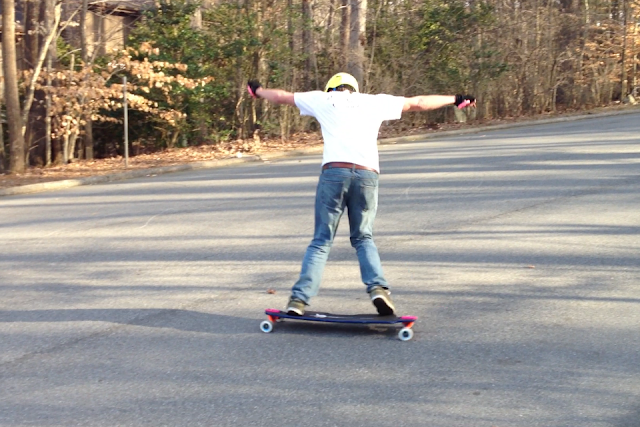 I know what you're thinking: "Ok, so they wear well but how do they slide?" The slide on Tiger Tuesdays is consistent and smooth as silk. I mentioned that they like to thane and I was not exaggerating. Tuesdays will paint your favorite runs with nice white lines all day long. Even you shorter slides will drop some heavy thane on the ground. As is usually the case with a thane-y wheel Tuesdays make for a very controllable slide. I have been pushing to get my slides bigger and bigger have not iced out once on Tuesdays. They are amazingly predictable and consistent. It has been a long time since I have ridden a wheel that thanes so much but doesn't change its slide characteristics as it wears. 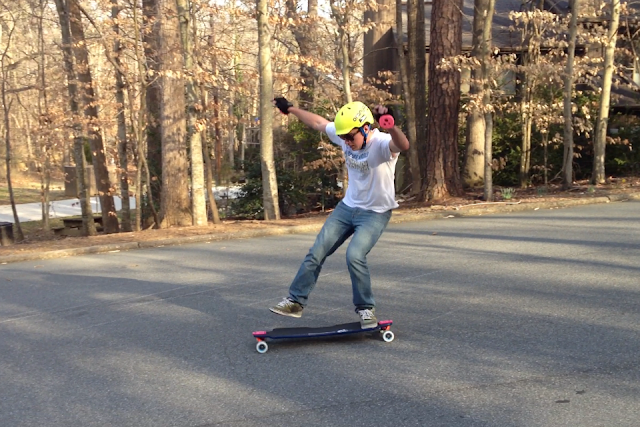 It can't all be good....
Every wheel on the planet has it ups and downs and Tuesdays are no exception. I would venture to say that the biggest downside to Tiger Tuesdays is that they thane so much. I'm calling this a downside (even though some people LOVE leaving thane) because dropping lots of thane on the ground is essentially leaving your wheel on the ground. This translates to a wheel that is going to wear down pretty quickly. However, I will give Tuesdays this, having ridden wheels that thane a similar amount it would appear as though Tuesdays do have a longer life.

The Bottom Line
Would I recommend Tiger Tuesdays to a friend?
My friends would freaking love Tuesdays. Mostly because in Chapel Hill we don't have a ton of long technical downhill runs but we have tons of hills for freeride. Tuesdays are a good wheel for a lot of things, but freeride is really where they excel. I have really enjoyed pushing my freeride game up to bigger and better slides with my Tuesdays and I think that anyone looking for a 70mm freeride wheel should place Tiger Tuesdays pretty high on their list.
Tuesdays wear well and have a slide that is controlled, predictable, consistent, and silky smooth. I wouldn't call it beginners luck, because I know that Tiger spent a ton of time developing these wheels, but for a first wheel they really nailed it.

Thanks for reading!
Any questions, comments, concerns, loveletter, stickers, stinkbombs???
Send them my way!