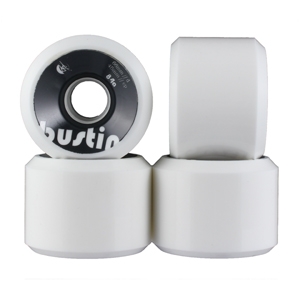 The Boca line of tightwall wheels from Bustin Boards is your all around thrasher. These wheels, in my opinion, are the marriage of the Premier and Swift wheel lines by Bustin. I have already reviewed their other wheels, which put me in an interesting position because these wheels were actually their first to be released, and most people had ridden the bocas before the other wheels. Which means I will essentially be reviewing these under the lens of a rider who has ridden all of their other wheels before these ones.


Bustin Bocas have an interesting shape to them. However, before I get into my whole spiel about the shape of wheel, lets talk about the specs on these bad boys. The Bocas come in 3 sizes, and 2 different durometers. Your size options are 66mm with a 45mm contact path, 70mm with a 50mm contact path, or 75mm with a 55mm contact path. The smaller two sets come in an 84a durometer and the 75mm wheels come in 82a. As I said before the wheels have an unusual shape, the closest I have seen are Fireball wheels, and you don't see it that often in longboard wheels. 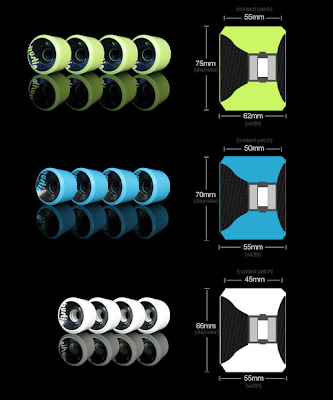 The shape, however, lends itself to high performance in multiple disciplines. The idea behind the shape of the wheels is that you can do whatever you're looking to do with a wheel based on how you ride it. For example, if you were to slide this guy all day, the edges would wear down and you would have yourself a nice slide wheel. On the other hand, if you were to only downhill on these sons of guns, the hard edges would stay there and you would be able to get that downhill performance from it. 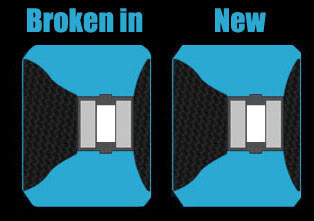 I personally requested the 66mm Bocas for a few reasons:
1) they look like they are pretty light
2) the look like they can be broken in really nicely
3) they would go great on my Mini Maestro for commuting and freestyle
Lets just say... I was right, haha.

I slapped these on my Mini Maestro for a tight light thrasher that could haul around campus, hit people slalom hard, perform on medium hills, and tear it up with some flippy tricks. I'm happy to say these wheels could do ALL those things really well.
I wanted to break these wheels in fast and best way to do that is to slide! So on day one I was riding it to campus and hitting standing 180s all the way... or at least trying... These wheels were surprisingly sticky, so much so that they actually caught me off guard at first. I guess I had been riding too many pre-broken in freeride wheels lately, haha. Being so sticky definitely has its benefits though.
People slalom on these wheels is awesome! They grip hard on each carve so that you can really speed off in that opposite direction. I ride my board anywhere and everywhere including all over my 30,000 student campus so there are times when you need your wheels to be responsive under your feet. The Bocas were up to the task and then some. Before being broken in the grip was pretty insane for a hybrid wheel like these but still retained a high degree of function grip after being broken in.
I put these wheels on a 32 inch campus demolisher which is awesome, but not the best downhill set up. So obviously I have never taken these wheels super fast, but I have taken them on some nice intermediate hills. The Bocas took the speed well, and after they were a little broken in could shave speed and spin quick 180s like nobody's business. I would be eager to try the big ol' 75mm Boca wheels on some bigger slopes.
Having such light responsive wheels was super cool for freestyle time. A lot of people get really caught up in putting the biggest wheels they can fit onto their longboard, I tend to go in the opposite direction more often than not. Having these little 66mm dudes on my setup made manuals and flippy tricks effortless.

This is going to be a weird sentence to say, but where I truly thing these wheels shine is everywhere. What I mean is that I don't think you can pin these wheels down to one discipline. They aren't as good at any one type of riding that a wheel designed for that riding would be, but they are pretty freaking good at ALL types of riding. Which I think is really cool, because I have ridden a whole mess of different wheels in my time, and these are probably one of the more versatile sets.
Anyone out looking for a wheel they can throw on a set-up that they want to do everything and anything on? Well check out the Bustin Boca line. They have really won me over!

Remember any questions, comments, concerns, praise, or more praise,
Feel free to hit me up!
Wayne
Posted by Wayne at 7:42 PM