Hello All,
I’ve been riding an Ethos for about a month now and have hit a variety of different roads with it. This board has been in garages, around campuses, down twisty technical-downhill mountain roads, on neighborhood runs, and on sketchy greenway paths.

There a few different versions of the Ethos which are different lengths in inches. Comet currently makes the 36, 38, and 40. The older versions were each one inch shorter, so 35, 37, and 39. Mine is one of the older Ethos 35s, but not too much has changed with the new versions. The biggest change is that the front of the newer boards are wider. My tiny feet don’t mind the narrow nose, but some other people have complained about how it forced them further back on the board than they wanted to be. This is not an issue with the current boards, however.

The specs vary with the different lengths, although they are all about 9.75 inches wide. The wheelbases are proportional to the deck length. Mine has a 22-inch wheelbase, which is really the most important thing, spec-wise. This is what Comet has to say about the board:
“Ethos are modern downhill shapes with kicktail, rails and directional rocker for maximum control on any surface.”

This isn’t too descriptive, but it’s certainly true. The board is as speed-capable as you and your truck setup are. It is completely stiff even with all my weight on the center of the board and I haven’t noticed any significant torsional flex. The construction is a solid number of environmentally friendly maple plies. You may have heard bad things about Comet’s build quality due to eco-glue. Disregard them. Those problems have long since been fixed and all the older Comet decks I have seen and ridden are still tanks. My Ethos is a few years old and didn’t live a gentle life before I got it. It’s not warped at all and as blunt as the nose has been made by repeated contact with harder surfaces (like curbs and rock walls), there are no delaminations there. There is a delam in one of the wheelwells, but it’s nothing that couldn’t easily be fixed with some wood glue and it’s too be expected after so much abuse. I am at least the third owner of the board and I have put it through impacts that would blow out the nose of a drop-through board and there wasn’t any more damage. Long story short, the construction is solid and don’t let Internet rumors of eco-glue put you off. 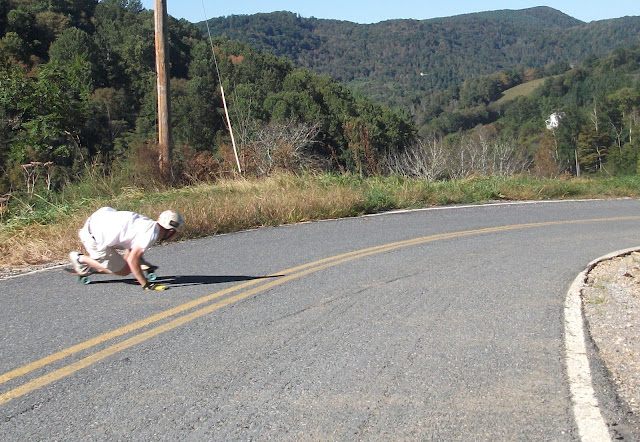 The significant features of the board are the kicktail, rails, and directional rocker/concave combo. The kicktail is not super steep, but it has plenty of pop and leverage. The rails seem kind of silly at first, but are great for carrying the board back up the hill, especially with gloves on. They are also make it easier to grab rail during glove slides. I use the rear of the rail cutout as a grab point for heelside predrifts. It gives me a little more grip and serves as a reference point for keeping me from putting my hand too far back and possibly touching a wheel (which could certainly happen on such a short wheelbase).

The Ethos features a directional rocker, which is pretty unique to Comet’s construction. The lowest point of the rocker is toward the front of the board. This makes for a nice pocket for your front foot to rest in and angles the rear of the board ever so slightly, which is nice for resting your foot on in a tuck. The concave is nothing crazy, but is certainly enough. I don’t know the actual depth of it, but it is comfy and pretty much perfect for the board. It’s not so aggressive that it gets annoying for pushing, but it’s enough to hold my feet in. There are also flares in the back that make for deeper concave above the rear wheels. They aren’t huge like some of the boards around today, but they are enough to make the rear concave at least as deep as the front and give you something to push against in a tuck. One of the problems with rocker on most boards is that it wedges your trucks up a few degrees. The Ethos features a ‘flush mount’ where the board has been CNC cut at the truck mounting points so that they are completely flat, preserving the original angle of your trucks.

Commuting
The Ethos is not exactly intended to be a commuting board, but it does actually work quite well. The short wheelbase makes it very nimble for pedestrian slalom and the kicktail makes it even easier to maneuver in addition to helping with curbs. It has even been tic-takked up a mountain road before. The only real downside to commuting on the Ethos is that the stiffness makes the ride a bit harsher than a flexier board on rough pavement. This is a trade-off for improved performance when going fast and sliding. 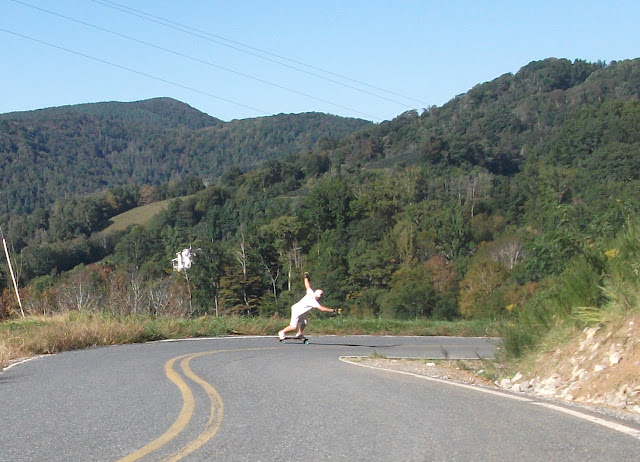 Freestyle
Again, the Ethos isn’t marketed as a freestyle board, but it does happen to do pretty well, especially the shorter ones. The kicktail has plenty of pop and the smaller ones are not super heavy. My personal board has been ollied, kickflipped, 360-pivoted, and manualed (not all by me, of course). The board isn’t going to hold back your freestyle capabilities unless you really require a nose kick as well as a tail. There also is not enough room for much dancing on the board. 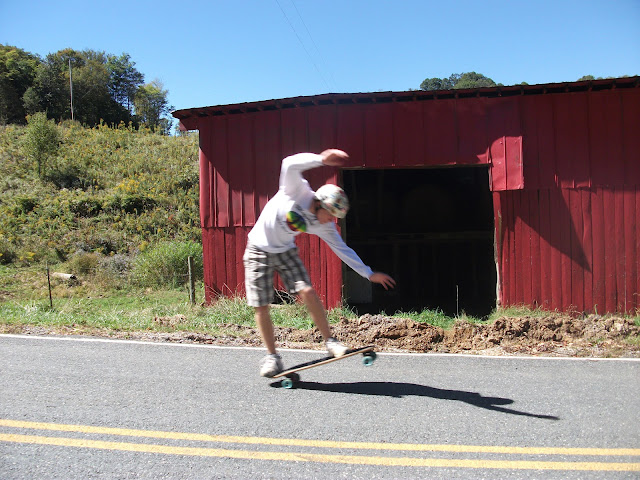 Downhill
The Ethos is marketed as a downhill board and it is certainly capable. My 35” board isn’t exactly the most stable thing around, but that’s mostly down to the setup. The 22” wheelbase makes for crazy amounts of grip when you want it and gives a lot of control. I’ve been riding Metro Motions on the board (a slide-specific wheel that is certainly not known for gripping well) and can easily grip corners that I have slid out on when riding a drop-through with grippy wheels. I can get more weight on the back truck as my foot is right above it, pressing them down. The board is stiff so it’s not sketchy when sliding at high speeds. I’m running surf-rodz indeesz, which are very agile, turny trucks, and the board doesn’t start to get sketchy until above 30mph or so. Above that, bumpy pavement and rocks on the road make things interesting. Set up with some low angle RKP trucks, this board could easily go fast despite the super short wheelbase. The rocker, concave, and rear flares make it very comfortable to tuck on. The longer versions are certainly far more downhill-capable than my baby board though.

Freeride
Despite the short wheelbase and topmount truck mounting making the board incredibly grippy when I want it to be, it also makes for a lot of control for sliding. It is easier to kick the rear out when your back foot is right over or even behind the back truck. It does take a bit if adjustment if you are used to a larger board, and you have to be very careful if you put your back foot on the tail. If you get your back foot behind the truck and do a 180, you have to be careful about your weight placement or a switch 180 might result in a surprise nose manual and faceplant. 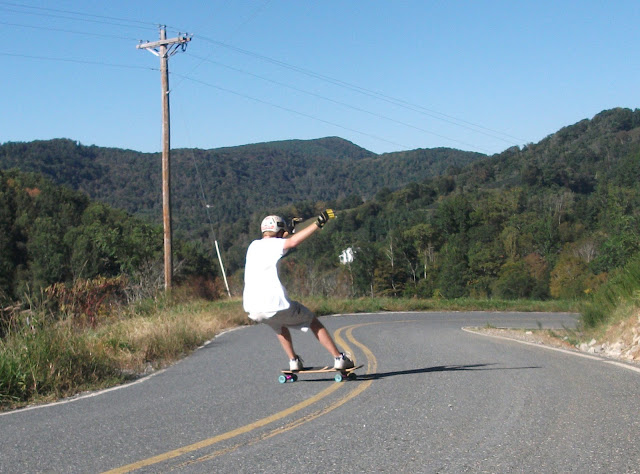 Honestly, breaking down the board by discipline is missing the point of this board. The Ethos is all about skating everything you encounter. This is the board you can grab when you don’t know what kind of terrain you are going to be skating. You can go fast, go sideways, cruise around the neighborhood or greenway, and even hit the skatepark. What the board excels at is going to depend on what trucks you run. I’ve been loving surf-rodz indeesz for the kind of riding I’ve been using the board for, but a lower angle RKP would make it better for going fast. Randal DH trucks would probably be silly stable even with the 22” wheelbase, but anything with a baseplate angle of less than 45* would be way more stable than it is now.

The Ethos is the best at what the British call “cocking about.” It is not the best balls-to-the-wall hill bomber out there and it doesn’t take skating seriously. If you are the kind of skater that likes to find a hill and kickflip at the top of it, do a 360 a little further down, then tuck and rail corners, this may be the board for you. If you want a board that can do pretty much anything, the Comet Ethos gets a strong recommendation from me. This board just wants to have fun.