What’s good, readers? It’s ya boy Big Dog, Land Rover, Shampoo Hands Branley. I woke up this morning
and realized that it was time to drop some knowledge on the heads of skaters around the world.

And when I say around the world, I actually mean places where it gets cold. I’m from North Carolina. We
have mean winters, by my standards. But with the cold weather comes a general lull in skating. People
start whining “But my lips are gonna get chapped so I can’t kiss my boo” and “I might get frostbite”. I
ain’t about that life. The steez runs through my veins year round.

I know that by now you’re probably starting to get a little curious about what I’m about to teach you.
Maybe even a little excited. And with that, I present to you:

Okay okay, you can stop the applause. I’m going deaf. I’m going to start from the toes and work all the
way up to the head. As a heads up, the following items can be found on Daddies Board Shop, which is an
awesome site AND an awesome sponsor for the UNC Longboard club.

I’m gonna be real with you, I love my feet. These bad boys are the reason why I can skate as well as I
can. Thus, I treat them with the utmost care and respect. Once the cold comes, they are always bundled
in a warm pair of socks that makes them feel like they’re being treated to a nice fire. I don’t force them
to be outside half naked in a pair of sandals. Now, granted, skate shoes alone are pretty thick. They’re
warm on their own. But let’s say you want to kick your warm feet game up a notch. You’re ready move
past those white Hanes low-cut socks your momma bought you in eighth grade.

I’m gonna be real with you, I don’t think legware is actually a word. Does Boss Man Branley care? Heck
no! He says what he wants and makes it sounds sexy like an R. Kelly song. There are two big strategies
for keeping your Thunder Thighs warm this winter: underwear and outerwear. Daddies isn’t a Victoria’s
Secret so I’m not gonna start discussing underwear. I don’t want to know how warm or sexy your fancy
underpants are. So let’s talk outerwear. Sure, you can wear jeans. Some pairs of jeans are extremely
warm and comfortable. But, if you’re moving as fast as I am, the wind will rip through your jeans like
a thousand knives through a dojo. Unfortunately, nobody sells skateboard specific winter pants. You
could get some snowboard pants, but if you’re longboarding in the snow, you should get your longboard
taking away for being an idiot.

That’s right. Those are leggings. The more conservative readers of this post are thinking “YO DAWG,
THOSE AIN’T OUTERWEAR!” And to those people, I get on my horse grind and say “NAY!” I’m a college
kid. The moment the temperature drops below sixty degrees, the ladies on campus throw on their
leggings like they’re pants. I’m not complaining. And neither should you! These Dakine leggings are
gonna keep your legs all toasty. If you don’t want to flaunt your goodies, just throw them on under your
pants and skate to your heart’s delight.

I love my hands. They are some beautiful things. Not gonna lie, sometimes I feel like every girl wants
to hold them at some point. So naturally, I gotta make sure they stay in tip top shape. Ladies don’t like
hands with less than five fingers. Now you’re probably thinking to yourself “I bet this guy hasn’t thought
about the fact I’ll be wearing slide gloves.” WRONG. I think about everything. They don’t call me The
Abbott for nothing. Slide gloves are nice, but I know mine do not keep my hands warm. They protect
them from the road, but not from icicles. So here’s my solution:

My people over at Burton pulled through in the clutch. They made some thin gloves that will fit just
fine under your slide gloves so you won’t be feeling like a mummy while you’re tearing up the streets.
There’s also a special bonus: You see those targets on the thumb and pointer finger? Those are special
conductor thingies so that you can tweet, Snap Chat, Instagram, Facebook, Skype, read Longboard-Life,
AND shop at Daddies while you’re skating. Sure, you’ll have to take off your slide glove to do so, but
isn’t it worth it to shop and skate? Like my main man T.I. aka T.I.P. aka Trap King aka Grand Hustle once
said, “It ain’t trickin’ if you got it. It’s only trickin’ if you’re doing a trick while you’re trickin’ by buying
something to trick on.”

New section, new word. This time, I’m down to talk about underwear and outerwear. I’m gonna be real
with you for the third time on this post: there is only one kind of chestware underwear I rock during the
winter and that’s flannel. I’m not talking that Target brand flannel either. I’m talking you have to get in
your car and start driving north until you reach Canada. Obviously, they don’t have cars in Canada, so
then you have to get on your majestic steed and ride north until you hit the logging district. Once you’re
there, ask for a man by the name Caribou Nelson. Locals will point you to a small cabin in the woods.
Caribou Nelson lives in this cabin and if you complete his three tests of manliness, you’ll get the only
flannel shirt you’ll ever need. No flannel shirt matches up to a Caribou Nelson flannel shirt.

However, Daddies has your back for outerwear. And your front.

This Volcom Tactic jacket will make all of your skating desires during the winter come true. Chances are,
you throw this thing on, you’ll start skating and forget it’s the winter. Then, you’ll take it off and realize
just how dope this jacket is. You’ll be thanking your momma or your boo for buying it for you. If you
bought it for yourself, you’ll go into work the next morning and hug your boss like it ain’t no thing. Did
I mention that you’ll be looking so fly that people will think you’re airboarding? Granted, this costs a
little bit more than some of the other stuff, but it’s a jacket. You need one. Pneumonia may seem cool to
have, but it’s not worth it.

Those of us here at Longboard-Life love our heads and everything having to do with them. We protect
them like an armadillo’s shell protects the dillo. Look at this face: 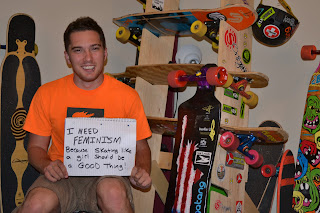 That’s a masterpiece right there, folks. We want to keep that sexiness going until he gets married,
because after that, his boo’s stuck. I’m writing this post assuming that you wear a helmet because idiots
don’t read my posts. My posts are on some higher level ish, nahmean? So let’s attack the face first.

One word: Ninjaclava. Go ahead. Say it. Now you know what it’s like to be me and say dope things all the
time. The Ninjaclava has two functions. First, it will keep your pretty face all warm and cozy when the
snow is a-snowin’ and the wind is a-blowin’. Second, if you fall on your face, it’ll give a little protection.
You won’t get a big ol’ chunk ripped out of your cheek when you try to have some pavement as an
afternoon snack. Now, onto the head.

My boys over at Burton made this pretty thing for us. If you don’t like beanies, you don’t like living,
cause I’m about to chop your head off with my katana. It even covers your ears so your little ear hairs
won’t be getting all covered in frost like mine do. The best part is, it fits underneath your helmet so you
won’t be looking like one of those fools who tries to wear a helmet on top of a beanie with a big pink
poofball on the top. Oh and the other best part? It matches those socks up top! Look at you, matching. I bet
your boo is probably wishing I’d give you fashion advice on a more regular basis.


Here are links to all of the items (excluding Caribou Neslon flannel):

Email ThisBlogThis!Share to TwitterShare to FacebookShare to Pinterest
Labels: Culture