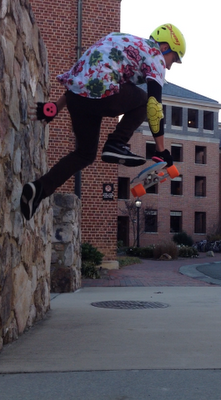 Hello Friends,
I come to you today with a review that many people thought would never be written, that of the infamous Loaded Chubby Unicorn. The Chubby Unicorn has definitely been under development longer than any board I have ever heard of and there has been more stoke and hype around this specter of deck than I thought imaginable.  We have all seen the glimpses of the Chubby Unicorn in pictures and videos for a very long time and it will finally be available worldwide on December 4th. 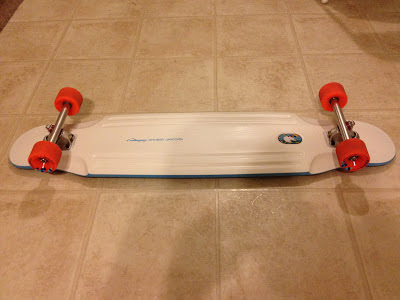 The Chubby Unicorn is a topmount, double kick, symmetrical freeride and downhill board. Despite the seemingly simple shape the Chubby Unicorn, lovingly called the Chubby by many, is a board unlike anything currently on the market. However, before I get into how this thing handles on the road, let’s talk tech.
The Chubby Unicorn spent an insane amount of time in development to make what Loaded thought to be the best downhill freeride board on the market. In doing so Loaded added some serious tech to this deck to really make it perform in the manner they wished. 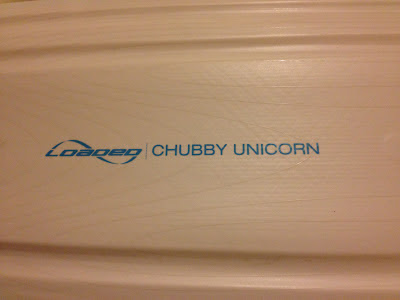 There are several novel features, unique to this board, that are not currently available anywhere else on the market. The most intriguing of which are the Ultra High Molecular Weight Polyethylene (UHMWPE)  skin on the bottom layer of the board and the urethane sidewalls coating the rails. These were both added to give the board some extra durability and dampen vibrations when going at top speed. I know that everyone has as many questions about them as I probably did, so I made sure to spend extra time testing every aspect of these new features. 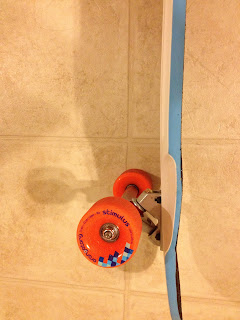 If you have ever read one of my reviews then you already know that I always review a board in each of what I consider to the four main categories of longboarding. This review shall be no exception, so let’s get started.

Commuting
When it comes to a commuter the Chubby sure can make a run to class or work a whole lot of fun. Especially if that run to class or work includes some nice terrain to tear through in the process. I personally find W-Concave to be kind of hit or miss with me in many aspects of riding, but commuting is generally where I don’t like it. However, the W on the Chubby is nice and flat on top so it doesn’t make my feet sore when pushing on it for a long time. Another nice thing for me, because I’m a mongo pushing kook, is the concave. While it is definitely there, like the W, it is not crazy steep foot cramping concave. Finally, I would say that the weight on this board is just right for a commuter, I have ridden dozens of boards that are composed of like 20 plies of maple and they weigh a ton, coming in at less than 5lbs makes the Chubby pretty enjoyable to push around.
Favorite Commuting Setup:
-Paris 50*, Orangatang Nipples (Hard), Orangatang 4President 83a 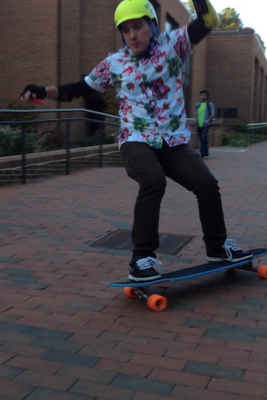 Freestyle
Well the most obvious trait this board has for some freestyle action are the two giant kicktails on either end. I think that most boards keep their tails a little too short, well the Chubby said screw that! Loaded beefed their tails up with big ol’ 7 inch kicks which is great for freestyle and for freeride alike. There is enough tail to actually pop a significant ollie (not the 1inch ollie you get with most longboards) and you can get plenty of leverage on the tails to do things like shoves, big spins, tiger claws, you name it. Some of the more subtle freestyle bonuses are the urethane sidewalls and the UHMWPE skin on the bottom. They are really nice because if you’re like me, and you don’t have perfect manuals on lock, you will often drag the tail of your board along the ground. Of if you are constantly hitting ollies or big pop tricks off the tails you scrape your tail up pretty fast.  The problem is that on a board with a price tag as daunting as the Chubby Unicorn getting super fast razor tail would be terrible. Fortunately, that urethane sidewall and UHMWPE skin have done wonders to keep my board in tip top shape (despite the fact that I have been intentionally trying to thrash it to give you the best review possible).
Favorite Freestyle Setup:
-Paris 50*, Orangatang Nipple Bushing (Soft), Orangatang Stimulus 86a 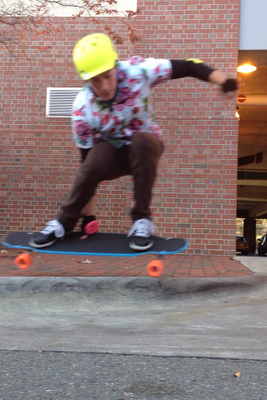 Downhill
The Chubby Unicorn is one fast moving son of a gun. I can honestly say that I don’t think I have ever felt as stable on a board as I have on the Chubby. To be fair, this board was designed with me or someone very close to my height, weight and shoe size in mind. I am about 5’9”, 160lbs, and wear a size 10.5 shoe and this board felt like it was meant to be. I am the first to admit that downhill is my weakest skill in longboarding, but I can at least get pretty fast if I try, and I took this board to some of the biggest hills Chapel Hill has to offer and it performed very well. It made me feel more confident going fast which was great because as we all know that person who is the most sure of her/himself is generally the best at downhill, haha.  I probably maxed out in speed at around 40mph on some 45* trucks and I didn’t feel even a slight wiggle under my feet. It is seriously like riding a on a magic carpet, or actually, just like riding on a big fat Unicorn. The wheelbase is long enough to keep stable but not so long that you lose maneuverability. The concave keeps your feet where you want them to be without being overbearing and restrictive. In addition I really liked have the wheel flares on the board as a reference point I could feel without looking down at the board. Finally the recessed truck mounts lower the board just a tiny bit and takes your center of gravity down there with it which adds a little more stability to your runs.
Favorite Downhill Setup:
-Surf-Rodz RKP 45*, Venom Bushings, Orangatang 4Presidents 80a 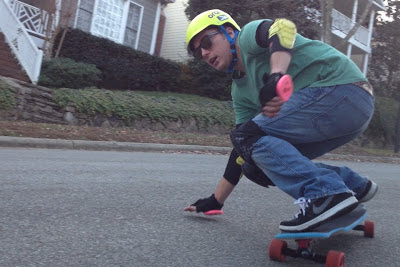 Freeride
I am aware that the Chubby is downhill/freeride board, but I would like to make the argument that it is actually a freeride/downhill board. Mostly because this board, in my opinion, is at its best during some freeride action. I like that the Chubby retained a wheelbase of only 28.25 inches because it makes the board so freaking nimble on the hills. If you like 180 slides you can spin until your heart’s content with this board due to that small wheelbase and the multifaceted uses of the concave. I have mentioned that the concave isn’t anything super serious, but it is in its simplicity that it shines. The rails and W have enough to grab onto with your feet no problem when transitioning between slides or holding out long slides. I’m no pro rider and cannot hold 16453 foot slides for days, but I have definitely hit my longest slides to date on this board. Additionally I really like to use my tails when I freeride, so I like having the enormous tails on the Chubby when hitting the slopes. The tails have a little bit of concave in them  and are so beefed up that you can definitely keep your foot locked in on the tail in any situation. Finally, let’s talk grab rails. If you are a fan of early grabs or stalefish/indy slides you will be a fan of these grab rails. They are definitely deep enough to grab into with your fingers and get a little more grip on your deck. The only time I ever had an issue with them was if I were wearing slide gloves with finger pucks on them; but then you can’t really grab anything anyways so I can’t really call that the grab rails’ fault.
Favorite Freeride Setup:
-50* Calibers, Blood Orange Bushings, and Orangatang Stimulus 83a or Baluts 80a 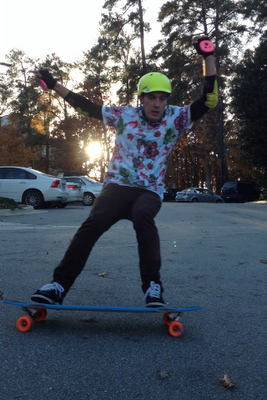 Durability
I don’t normally devote an entire section of a review to the durability of a board, but I think the Chubby merits this special adjustment. I know that everyone wants to know if the Chubby Unicorn is really worth the extra money and the durability of board definitely plays a role in that. I have actually been attempting to thrash this board; I have treated it like absolute hell. I have been taking it off stair sets, curbing it, flipping onto the rails, trying to razor the tail… you name it, I have put this board through it. Through all of this my Chubby still looks better than most of the boards I have and that I take way better care of. I haven’t even been able to scrape through the urethane sidewalls to see the wood on the tails or the rails yet.

It Can’t All Be Good…
Every board has its up and downs. There is no silver bullet longboard that will be a perfect fit for everyone. I believe the Chubby Unicorn has come incredibly close to being a do it all board, but I also acknowledge that this board won’t be it for everyone. My main reasoning is the concave. Some people are really big fans of very extreme and elaborate concave and some people just do not like W concave. This is simply a case of not being able to please everyone because everyone looks for something a little different in a longboard.
The Price
I also happen to be a pretty gifted mind reader and I know the other downside everyone is thinking about right now. The whopping price tag. The Chubby Unicorn is going to set you back $360 for the deck. That is a freaking investment right there. I know that this has ruffled a lot of feathers with people who have been waiting forever for the Chubby to come out only to find they can’t afford it. While I am in no way saying this board is cheap, I do think it is worth the price.
My background in sports started with cycling and surfing which both carry a much larger pricetag than longboarding does. A decent surfboard, even used is going to be at least 300 big ones and the price only goes up from there. Now, to get anywhere near a decent road bike will cost you $1000 and to get a bike that is competitive at the racing level we are talking well over $4000. The Chubby Unicorn is a professional level board using the most innovative manufacturing techniques on the market; it is the crème of the crop, and you really do get what you pay for. 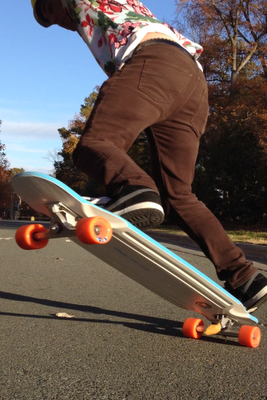 Bottom Line
Would I recommend the Chubby Unicorn to a friend?
Yes, this board has received the Wayne Capps Seal of Approval in pretty much every way. I would however, encourage anyone looking to purchase a Chubby to try one out before you buy. This board does require a significant investment into the sport of longboarding so you need to be sure that you’re in it for the long haul and that you feel comfortable on the Chubby.
I think this board would best suit someone who is looking for one board to do everything. Many people out there now have quivers of boards (myself included) and I think that the Chubby might be a great alternative to a quiver. It costs less than getting more than one board and, in my humble opinion, can do the job of many boards better than any two boards combined.
If you know someone with a Chubby, give the board a try and see if you like it. I am fairly certain you will be impressed and I have to give mad props to Loaded for making such a solid board. 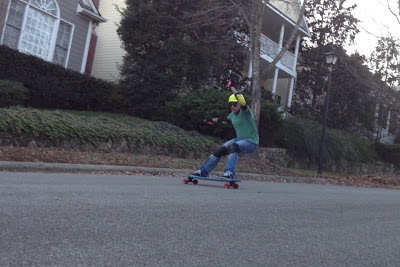 Thanks for reading! Any questions, comments, concerns!?!?!?
Hit me up!