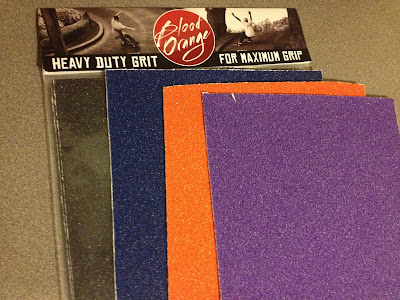 Welcome to our first ever review of griptape! Today we will be looking at Blood Orange grip which is a relatively new addition to the griptape market. In a world of die-hard Viscous fans producing another grip that specializes in freeride/downhill was a ballsy move. However, it certainly appears that Blood Orange has added more than a few skaters to its ranks. 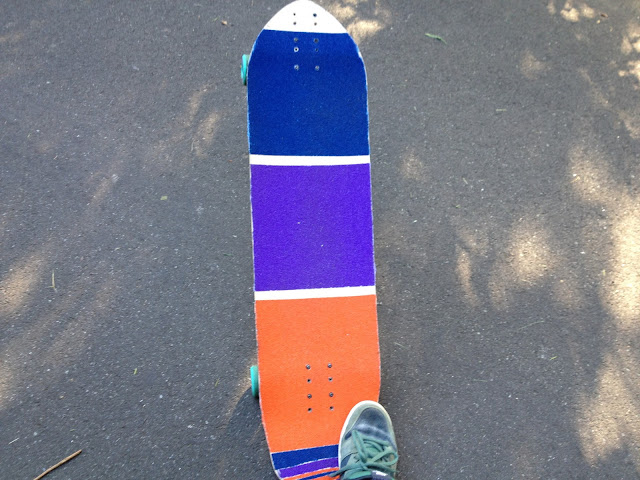 I feel like griptape actually takes a ton of work to review because in order to fully evaluate how well it holds up you have to skate it for at least a couple months. I gripped up a couple boards with the plethora of tape provided courtesy of Blood Orange so I could test it out on a variety of board shapes and setups.

Initial Impressions:
When I opened up my first pack of Blood Orange grip I was surprised by the fact that it didn't feel insanely coarse. I was expecting something that would cut my fingers up and make me never want to touch this grip without my slide gloves on. However, upon touching it I learned that Blood Orange only feels just a little more course than a standard skateboard deck's grip. I ended up deciding to put my Blood Orange onto a Bombsquad Mini Agent for downhill, an Omen Sugar for Freeride, and an Apex 40 for freestyle. 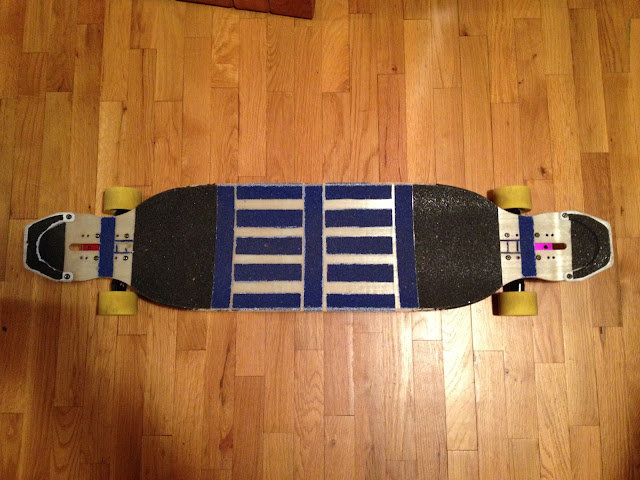 Before even getting into how well the grip works, I can tell you this much. I really like that it comes in colors, colorful grip is a great way to customize a deck.

Gripping Your Board
I don't know if Blood Orange grip is sold by the roll (I assume it is) but all of my grip came in packs. Packs of grip are kind of nice because they are really simple to grip your board with. You basically just have to peel and stick then shave off the edges. The adhesive on the back of the grip is not insanely sticky but it didn't have a problem adhering completely to my board. 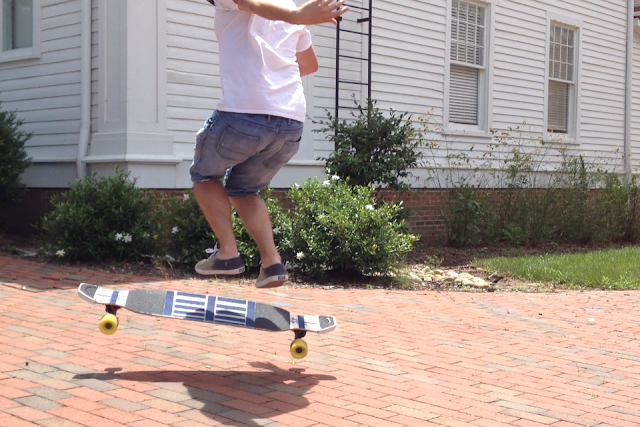 When the Grip is Fresh
I mentioned that Blood Orange grip surprised me because I thought that it would be a little more coarse. I guess I was so taken aback because when I think of freeriding I think of super harsh grip tape and I know that Blood Orange loves the many freeriders of the world.

Freestyle
By the very characteristic that surprised me, a lack of coarseness, Blood Orange grip is pretty nice for freestyle longboarding. It is grippy enough to make sure that your feet don't slip off the board unexpectedly at any point but not so much so that you can't move your feet. This is really nice for tricks, like ollies, where you slide your foot up the board. Unlike with super gritty tape your foot can slide relatively freely allowing you to get ample air. However, if you plan to only freestyle on your board remember that Blood Orange is still more coarse than what a standard street deck would be gripped with. 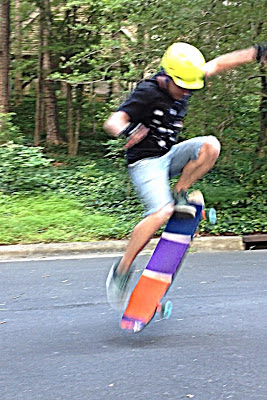 Freeride
I have to admit, I was hesitant about the performance of Blood Orange grip when it came down to big, nasty, fast slides. The reason most people rock Vicious grip is that it is so coarse you know when you put your feet on your board they aren't going to move. So how would this less coarse tape compare? 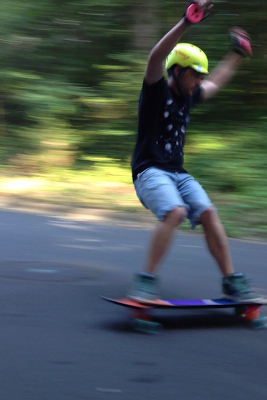 Quite well, in fact, surprisingly well. Despite feeling less course to the touch than many other brands of freeride grip tape, Blood Orange held me feet where they needed to be without question. After getting over my initial concerns about the grit of the tape I felt very confident with my Blood Orange grip when sliding in any direction and with all sorts of weird foot placements.

Downhill
Blood Orange grip is great for downhill, in my humble opinion, because you can move your feet freely. I'm all for that "locked in" feeling, especially when freeriding, but I do feel that you can be too locked in. When I am going fast I like to be able to subtly re-position my feet without actually having to lift them up. Blood Orange grip lends itself to those subtle movements by offering little resistance to your feet moving freely on the deck. However, like I mentioned in the freeride section, Blood Orange does still offer ample grippiness for your feet. 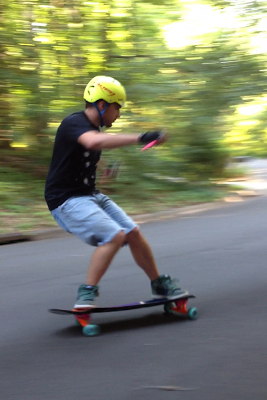 When the Grip is Old and Beat
It's a sad fact of life; grip tape wears out over time. Your once clean, beautiful grip job gets torn up, worn down, muddy, and down right ratchet after some serious ride time.

Freestyle
As Blood Orange grip ages it probably gets a little better for most freestyle-y activities. However, it takes an insanely long time to wear it down significantly. Once you get there the worn down grit allows you to move your feet a little more freely on the deck. Which means if you are into board dancing old Blood Orange would feel pretty nice to you. However, I don't think I would want to spend the time trying to wear down my grip just for that application, it would take way too long. 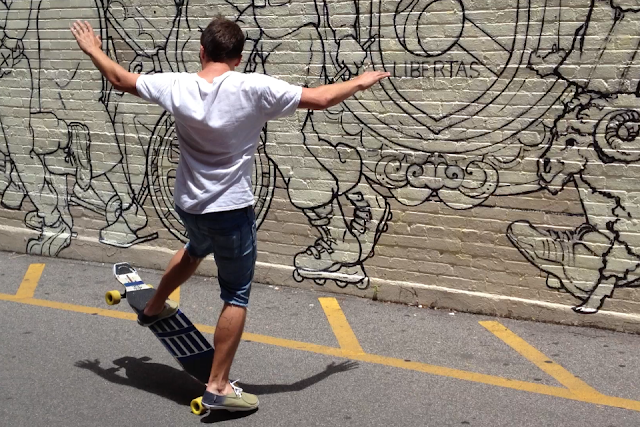 Freeride/Downhill
Although this grip tape does certainly loose some coarseness over it's lifetime I definitely feel like it takes much, much longer to lose that grippiness than other tapes do. Basically, although Blood Orange may not start out as the grittiest, coarsest tape ever it doesn't really lose much of that over time. Which means you can freeride and downhill on Blood Orange grip to your heart's content without having to worry much about your tape wearing out on you.  This grip definitely has a long lifespan. 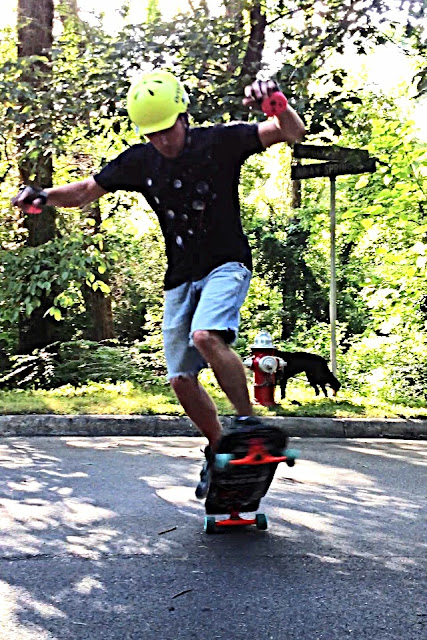 It Can't All Be Good
Every product, not matter how much you like it, has a downside. The downside with Blood Orange is pretty obvious; its coarseness. I think that the downside here is more of a preference issue than an objectively bad trait. However, some people really crave that insanely coarse griptape. Although I personally thought that Blood Orange grip was more than grippy enough for anything I used it for... I don't think that would be the case for everyone. I know people who don't feel confident in their gear without super fresh, super coarse grip every couple weeks.

The Bottom Line:
Would I recommend Blood Orange Grip to Friend?
I would definitely recommend Blood Orange grip tape to anyone looking for something new to put on their board, with an addendum. Being that it isn't the coarsest grip tape ever. Beyond that, I think that Blood Orange did a really great job with their grip. I am especially impressed by how long it lasts. I have been riding mine for a very long time with an absurdly minimal amount of wear. 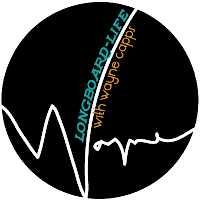