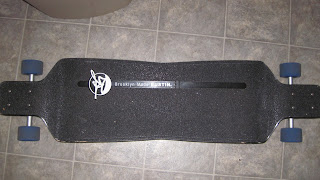 I received a wonderful package from bustin boards with three sets of wheels and an Ibach deck all ripe to be shredded on and then reviewed. Look forward to the wheel reviews in the near future, but I haven't sufficiently ridden all of them yet to give you a grade A report. Until then, however, I can treat you to my first impressions on the deck and the wheels I have been riding on it.


My current setup on the Ibach is the 8ply limited edition deck, with paris 180mm trucks, purple orangatang nipple bushings, and 70mm 78a bustin swift freeride wheels. But before I get into the nitty gritty of a down and dirty Ibach review let's go over the basic board specs and a quick pros/cons list.

One of the first things I liked about this board from square one is that it stood out in my quiver. First of all it is black and doesn't have any wood color showing, unlike my other boards, but more importantly it has what I consider a pretty sweeeeeet graphic. Being a fan of America, Liberty, Graffiti, and Longboards I was naturally taken with the graphic. The board just look sleek and sexy; like a stealth bomber or a jaguar ready to tear the pavement apart.

When stepping on this deck for the first time a couple things are immediately apparent:  1) it has crazy ass grip tape 2) it has sweet foot pockets and 3) it is a low rider. You will also obviously notice pretty quickly that there is no flex to the board, that it is waisted (meaning it narrows towards the middle of the deck and flares back out on either side), and that there are crazy little rails on the platform of the deck.

The deck has a really nice concave to it, dropping down 5/8 of an inch, which is a nice not too deep level in my opinion. It helps lock your feet on the board when going fast without keeping them there permanently when trying to do a little freeride. However, when looking to lock your feet into place you're going to be sticking them into the amazing foot pockets this board has. These guys drop 3/4 of an inch and when you put your feet there you feel like you can hit 100mph and not even sweat it.

Bringing us to the small detail of the downhill capabilities of the Ibach. Living up to what it was designed for, the Ibach is a downhill monster that can make even the most intimidatingly huge hills seem like a parking deck. With your feet locked in super tight and the super low ride of the deck you never worry about your speed getting out of hand. The board is crazy stable and handles extremely well at very high speeds. The best part is that if you ever feel like you need to shed some speed off with a nasty slide (or you just want some steeze points) the rails on the board really do contribute to your ability to really tear into a slide.

I had never seen a stepped slide rail system on a board before the Ibach and I was curious how it would handle and how much it would contribute to hitting and holding slides. I am super happy to report that not only do they make initiating slides easier they really help you dig your feet into long standing slides. Being able to dig your feet in on the rails like that made holding standing slide much easier since I could be more confident in putting more of my weight behind me when sliding. All in all I would consider these rails a smashing success and a great addition to this board.

Something else I consider a great addition to this board, and to just about any board for that matter, was the addition of kicks on both sides. Kicks, no matter how small, add a whole different dimension to  longboarding. The kicks on the Ibach are super tiny but they are amazingly useful. I had never ridden such small kicktails before and didn't think there would be much functionality to them. However, I was proven wrong in the best way ever. Not only could I use the kicks, I could use the hell out of them! I have been shove-it-ing the day away on the Ibach. I can hit all the shoves on this board that I can hit on any of my other decks.

So far it has literally been hard for me to find something negative to say about this board. The only things I can think of are that I would like the kicktails to be slightly bigger cause that would make the board all the more nasty and that regripping this board would probably be awfully difficult. The reason I think it would be hard to regrip is because getting the grip down into that stepped rail system seems like it would be a challenge. At least the grip it came with is crazy coarse and probably won't wear out for a super long time.

This board not only met, but exceeded the high expectations I held it to. The Ibach is a freeride board with the soul of a downhill board and the heart of an all around shredder. This board can handle it all, from dancing to hitting 40mph and not even skip a beat. Bustin really took their boards to a new level with this deck and I look forward to the next creations that come rolling out of the Bustin labs.

Thanks for reading!
As always, any questions, comments, concerns, feel free to hit me up!
Wayne 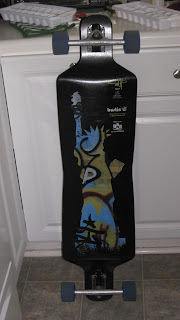