Dearest Lovers,
Have you heard the news? The news... the news I'm talking about, the news is that there is a new Sheriff in town in the Original Line-up. That's right, there is a new Apex hanging around and it goes by the name of the Apex 40.

Let's get into the technical specifications of the new Apex 40. This may be mildly confusing to some people, especially those newer to the sport, but the Apex 40 comes in two different varieties and it is important to understand the differences. Your two Apex 40 options are the AVRockerConcave and the DoubleConcave, which is the one I have been rocking. The difference between the two boards lie in subtle changes to the platform and kicktails.
The Apex 40 AVRockerConcave is the board devoted more to freestyle and commuting. The AVRockerConcave has taller kicktails than the DoubleConcave board and not as much as much of a drop down. Making it a rockstar for freestyle, hitting those big spin tricks, and taking on some smaller hills. This Apex is constructed with 3 plies of maples and carbon reinforced quad-axial fiberglass making it one tough son of a gun.

That was about all I can tell you about the AVRockerConcave because I was actually given the DoubleConcave Apex 40 to review. This board is meant for a little more freeride than freestyle, although either board can do both. The DoubleConcave has a tiny drop platform (a quarter of an inch), gas pedals, and as the name suggests, some nice concavity. 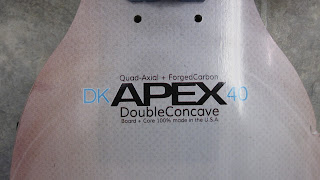 The Apex 40 series has a rather unique construction. The boards are very thin for their length with only 3 plies of maple. Seeing how thin they were made me question their sturdiness, however, once you stand on one of them that question is cast from your mind, they are clearly built to last. In addition to the maple the Apex 40 has quadaxial fiberglass and carbon holding everything together. This added a huge amount of durability to the board because carbon fiber is damn near impossible to break. The flex on my Apex 40 is not necessarily bouncey but it can definitely pop you in and out of hard carves and what not, but more importantly I think the flex helps it absorb impact shock. You can bottom out the deck if you really try, but its not super easy.
I was super stoked to take this board out and put it through some runs around town, so I set it up right away with a combination I haven't beat since then (except a wheel change).
-Surf_Rodz 177mm Indeesz
-Orangatang Stimulus 86a wheels
-Orangatang Nipples Yellow (board side)/Venom SHR Barrel 86a (road side)
The reason I like this set up so much is that Indeesz have a similar geometry and surfy feel to the S-Series trucks that Original produces and design many of their boards around. Although I don't believe that Original necessarily recommends S-Series trucks for the Apex 40 because it is more of a freeride oriented board I DO think that they obviously consider their own trucks when making boards. Anyways, I just never found a set of reverse kingpin trucks that I felt suited the board as much as the Indeesz, they made the board lower, super pumpy, and really really slidey. 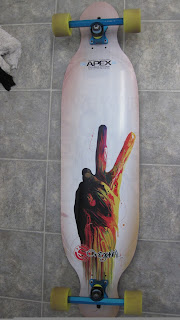 Now lets get down to how the Apex 40 performs in different styles of riding. This bad boy excels in that middle point right between intense freestyle and crazy freeride. Which means that it is super fun on both the flats and on the hills. Its not your typical super heavy stiff downhill deck or your featherweight flexy cruiser.
The Apex 40 is rocking some nice gas pedals, which are rails you can wrap your heel or toe around to get extra torque on slides, and they really add a lot of additional UMPH to your slides both 180s and long standees. The microdrop in the deck locks your feet in a surprising amount for being so little. You feel really confident in your stance when riding in the pockets. However, since the drop and concave are pretty mild holding long glove slides takes some getting used to, but once you figure out the positioning of your feet, it gets kind of awesome. The deck is a little light for a typical freeride deck which, in my opinion, made it much more agile on the hills. Throwing the board around for a slide takes very little effort and even more challenging tricks like slide shovits were smooth on the Apex 40.
Taking the Apex to the flats for some freestyle time is awesome, and possibly my favorite riding aspect of the board. The board is symmetrical with two mounting options for your trucks. I tried both and I very much preferred the inner mounting option for freestyle because it gives you a little more pop off the tails. The apex is a little heavier than the majority of freestyle boards, but what it loses in weight it makes up for in awesomeness. The damp flex makes it so you never bounce off your board, I have taken it off pretty high ledges and didn't bounce off or bottom out. The concave is mild enough and the platform is long enough for some serious board dancing and the concave actually locks your feet in nicely for peter pans. Flip tricks are also super sick on the Apex 40 because you have so much room to land on your board and you have dual kicks. Kicks are literally the best addition to any freestyle board in my opinion, they have opened a whole new dimension of freestyle riding to longboarding. 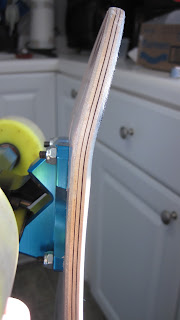 Commuting around town on this board is pretty rad. It is not the light bouncy commuter many people think of when a commuting board comes to mind, however, the Apex 40 is sick at getting you from point A to point B. What I liked about it was that you could pop the board into a tigerclaw over a curb and immediately tuck and flew down your every day hill with an equal amount of confidence and ease. Mentioned above the board locks your feet for standies really nicely, which basically means you can add style points to your commute by busting some 180 slides all over the place.
Of course it can't all be good. I'm going to take a second to talk about some of the weaknesses of the board. The Apex 40 is not a dedicated downhill board, which does not mean it can't go down hills very fast, it does mean that there are better boards out there for strictly downhill longboarding. Having a lower drop down deck and deeper concave is generally desired for a downhill board. Additionally I think I would have liked to see the tailed dropped a little lower so tricks like ollies, which are better with some serious pop, would be easier on the board. 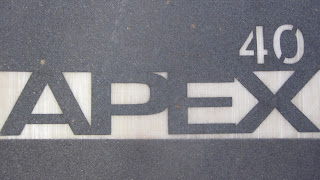 Would I recommend the Apex 40??? I totally would! Like I mentioned, I wouldn't recommend to someone trying to win DH races. I think that beginners would really like this board if they rode it too, however, I don't think that is the demographic of riders who would truly get the most use out of it. I think this board is exceptional in that it hit the perfect middle point between serious freeride and nasty freestyle, so those riders who are good at both and love to switch in between them should consider this board. It will hold those long slides, it will flip around in tricks, and it will stand up to a beating.

Thanks for Reading!
Any comments, questions, concerns, letters of Admiration?
Hit me up! 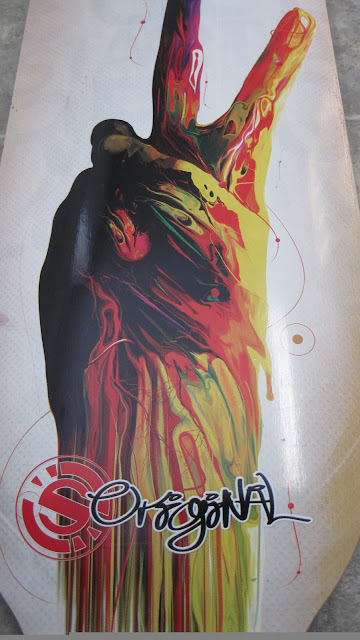