For those of you who may or may not have seen, Original released their very own Freeride board a little while back. Actually though, I mispoke, Original didn't just drop one freeride board, they dropped an entire line of 4 freeride boards. They call them the Beast and that's because they are indeed animals.

Although many of you may know this already, I feel it is important to make this point to people newer to the sport, there is a distinct difference between freeride and freestyle. Freestyle longboarding involves lots of flip tricks, manuals, and dancing. FreeRIDE longboarding involves hitting long slides and getting down hills in creative and innovative ways. The boards for either type are very different from one another and the Original line of Beasts are freeride boards.

What does one first notice about a beast? In the case of this board, the first thing I noticed was that it was a super sexy beast. Dropped through, low, sleek black, with big ol' flared kicktails on either side, and a sick grip job. That is the type of beast I have always wanted to ride. If you have ever known anything about me and my riding style then you would know that I LOVE kicks on a board, so I was super mega excited to take the Beast for a spin.
However, before getting into how it handles on the roads lets talk the board and its specifications. Original has a line-up of 4 different models of the Beast with two sizes and two styles of concavity. The two size options are a more stable 41in deck or more agile 38in deck. The concavity options are a rocker-concave, better for more tricks, and a W-concave, better for downhill oriented riding.


The Beast 41 Rocker Concave, the one I have been riding, has a nice concave to it, which although is not as extreme as the W-Concave, can still lock your feet in for some downhill action. I felt very comfortable taking my Beast really fast downhill when it had Paris trucks on it, however, once I put a set of Surf_Rodz on the board it was game over. It made it even lower and more stable. I was able to hit some serious downhill runs on this board despite it being the board designed for a more freeride style. I wouldn't recommend the RockerConcave to win you some races, but it can definitely hold its own going fast.
Although it can hold serious speed what the board is really meant for is handling loooong slides. This is what the Beast REALLY excels at. Having the concavity to lock your feet in place while gaining speed and then the huge gas pedals with which you wrap your toes or heels around kicked this board's and my own sliding ability up a couple of notches. My standing slides were drastically lengthened and very controlled when rocking the Beast. I can really just haul down a hill and turn sideways into a slide with 100% confidence and ease. I have really liked freeriding on this board and I think anyone who picks up a Beast will fall in love with its sliding potential.
Having big old flared kicktails like it does has lent this board to more than just straight freeride. The Beast line is pretty freaking good at freestyle longboarding as well. Like I mentioned above, I LOVE a board with kicktails, I think that having kicktails adds a whole different dimension of skating to your ride. The tails on the Beast are not only prevalent but they are extra-functional. You can hit all your favorite shoves, bigspins, manuals, whatever you're looking for with these tails. The Beast, being a freeride board, is a tad heavy for super aggressive freestyle, but once you get used to the weight it's smooth sailing.
Tails are not only a welcome addition to any board for freestyle but for commuting. You can use these tails to drop off curbs and grab a tigerclaw with the greatest of ease, the hardest part is getting used to lifting the weight of the board up. Being a drop through makes the Beast a lowww rider, which helps make pushing around town all the easier. 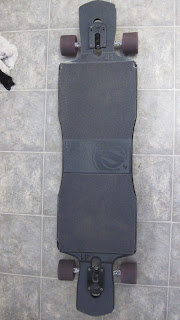 It can't all be good though. My biggest qualms with the Beast are that it is a heavy board, the grip falls off the gas pedals kind of easily, and the tails chip. Hitting a bunch of freestyle/flippy tricks inevitably means that your board ends up hitting the group upside-down, which pulls the grip off the rails and the chips the tails up a bit. However, I don't see this as being a big deal because gas pedals don't necessarily need a bunch of grip on them, all you need is to be able to wrap your foot around them for that extra Umph in your slide. 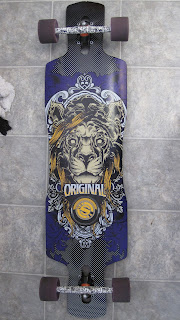 All in all the Beast does its name justice!!! It is a freeride machine that can hold its own going fast and hitting up some freestyle time. I have really enjoyed riding this board and I will continue to thrash it for many many days to come. If you're and intermediate rider who is very interested in freeride but also wants a board that perform well in other disciplines... you might want to get a beast under your feet!

Any questions, comments, concerns, advice.... Hit me up!