Hello fellow longboard enthusiasts!
Loaded recently sent me a brand new toy to play with, their newest board, the Fattail. The Fattail, as the name might imply to you, has one monster of a tail on it. It is a light, tight, flexy board that just makes you want to shred all around town and then some. 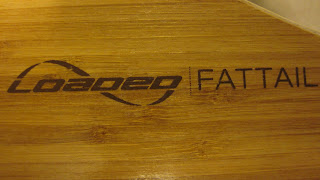 I was really excited for this board because I love (and I mean love with a capital L) flexy boards suited to freestyle. When looking at the board online I was thinking that it would essentially be a cross between the Loaded Bhangra and the Tan Tien, because it is an asymmetrical topmount (like the Bhangra) and is light and flexible (like the Tan Tien). I have really enjoyed both the Tan Tien and the Bhangra (see my other reviews) so needless to say I was stoked about the possibilities of this board. However, I was surprised, and pleasantly so, to find that the Fattail is actually an animal in its own league. 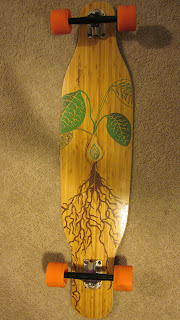 The Fattail is a super attractive piece of work. It has a sick plant and root system graphic, which happens to be sublimated; a sublimated graphic is pretty sweet because they are basically way more resistant to wearing off than normal ones because they are under the clear top layers of the deck. In addition to the pretty natural wood/graphic combination it has one of the signature crazy Loaded grip jobs. When I ride it through town, it turns some heads. 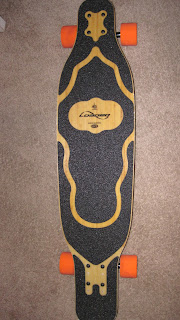 Normally when I review a board I talk about its commuting ability last, as usually the boards I rock have other strengths, but not this board. While it may be good at a whole bunch of riding styles, it is phenomenal, and I mean like getting a Swiss massage phenomenal, at getting you from point A to point B. I mean, I have never ridden a board that is as much Fun as this board. And that is honestly the best word to describe the Fattail, FUN!
My Fattail is rocking 150mm trucks, and for that extra carveyness and pumpyness, Purple Orangatang Nipple Bushings. This not only made the board a carving machine but combined with the flex of the board made it an unstoppable pumping juggernaut. I can pump all over the place, even up some smaller hills; it is amazing. The flex in the Fattail can only be described as powerflex. It bounces you around town with style and grace. I got a flex1 (the stiffer flex) and it was still quite flexy. I opted for the stiffer board because I know that I run my boards hard and do lots of freestyle, which really takes a toll on decks with lighter flexes. 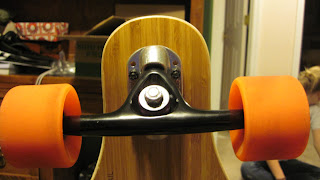 Speaking of which... Let us take a moment to talk about the Fattail's ability to freestyle. Right behind the board's mad commuting skills come the freestyle skills. It has not only a super sick tail but a slightly kicked nose, both of which are more than functional. In fact they put the "fun" back in FUNctional!  The tail is huge and makes shove-its, tigerclaws, manuals, and ollies easy as pie. The nose can manual, shove it, and even hit some bigger tricks with a little more effort. I mean, if you have ever made any sort of tricks work on a board with a little tail, then you will find that the nose on this board doesn't need to overcompensate for anything, haha. 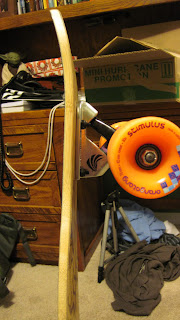 Very closely related to, if not the same thing as freestyle, is Board Dancing. By far and away my favorite style of riding, and something the Fattail likes just as much as me. Not being a drop through gives more of an effective platform to walk around on. So cross-stepping and peter-pan-ing are pieces of cake. Other more complex moves like pirouettes and 360 body varials are nice to hit on this big platform too. Another thing I really liked about having the kicktails there without the drop through trucks was that it make cross-stepping onto the nose or tail much more accessible so linking tricks became easier than ever. 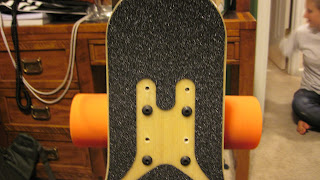 Now I want to take a quick second to talk about the camber on this bad boy. Generally I just throw a quick comment in about the camber of a board, but for the Fattail it requires its own section. The camber helps keeps the board bouncey and poppy. It locks your feet for pumping around like a man on a mission. It also really helps with hitting some quick 180 slides, your feet don't shift around on the board and are held fast... I drop 180 slides like they are hot on my Fattail. 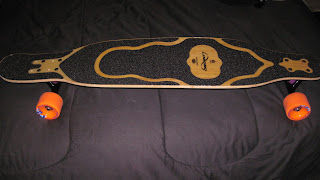 Speaking of slides, I wouldn't say that the Fattail is a board that will ever be known for its ability to hold nasty slides. However, what I can say is that you can hit some DIRTY freestyle slides!!! Like I mentioned, 180 slides are super easy because the board is so light and maneuverable and is on the 150mm trucks. It feels like you can just will the board to spin even if you're hardly moving.  My favorite slide on this deck, which is made easier by the giant tail, is the toeside 180 wheelie slide! It is just soooo steezy and easy to hit on the Fatty. 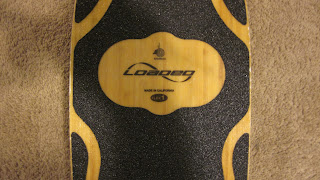 The Fattail, for all its strengths does have a weakness. It's just not the best board for downhilling, which of course doesn't mean you can't go fast on this board. It just means that if you purchase the board, keep in mind that it was designed around a certain skill set and downhill wasn't one of those skills. I have taken it pretty fast but the 150mm trucks and the flexiness make it a little sketchy at times.
Who should consider picking up a Fattail? I think anyone looking for a high performance board to bounce around campus or town with should think about this board. You can pump it basically indefinitely; it has some sweet sublimated graphics that just don't quit, and just enough flair for some freestyle and board dancing. Grab a Fattail and get ready to shred the town with the greatest of ease and steez!!! 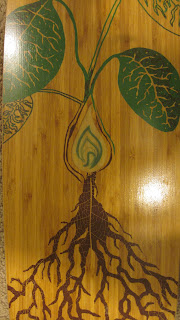 Any questions, comments, concerns, nominations... Hit me up!!!