This review is by Mr. Matt Fagan, an awesome dude with some equally awesome insights about the Bombsquad Agent Orange

Hola.
My name is Matt and I like to play skateboards. What probably makes my typical game of skateboards different from yours is that I live in Boone. That means if I want to skate, I’m probably going to be skating a fast hill. Unlike some places where you seek out the fastest hills, in Boone you’re surrounded by fast hills and have to find ones you’re comfortable skating. This could be finding ones with nice pavement, little traffic, ones that don’t end blind intersections, ones that friendly people live on, ones that don’t have cliffs to the outside or rock walls to the inside of corners, etc. The hills are not particularly fast, but going fast in a straight line requires different gear and skills than going fast around tight corners, or going fast through sweepers before predrifting a hairpin. This means a setup must be stable but able to turn fairly tight at speed and grippy but still able to be slid to shave off speed. This brings us to the Bombsquad Agent Orange, and how it works for my type of riding, and what is does not do as well at. Bombsquad is a smaller manufacturer based in Texas. They make noseguards, footstops, and stiff boards out of maple, and used to make aluminum boards.


The basic shape of the board is nothing particularly unusual. It is the classic directional topmount speedboard that has been around for a long time. It’s on the shorter side based upon the wheelbase options, but the standing platform is about 28in, so it does not feel cramped for me at all. The board is fairly wide, but not more so than other similar boards. Compare it, for example, to the Comet Voodoo Doll, which is 10.25in at the widest point. The widest point of the Agent Orange is where you need it. Full width is not far behind the front bolts. A lot of similar boards (the previously mentioned Voodoo Doll as well as many of the Sector 9 Downhill Division boards) are at their widest much closer to the middle. This is probably a vestige of their pintail roots, as width there is not particularly usable. That the Agent Orange has tapered a bit by then is useful for several reasons. First, it is simply less wood to carry back up the hill or push around. Second, it makes footbraking at speed significantly easier. It allows you to keep your leg closer in, similar to a waist on many popular freeride boards. Taper also helps with stability a little bit by reducing leverage under the back foot. It just lets you weight up your back foot in a turn for grip without wobbling through them.
The Agent Orange has multiple wheelbase options to adjust based on personal preference. I have found that I like the shortest (26.5in) option the best, but some of my taller friends who have messed around with the board prefer one of the three longer options. I’m short and have a fairly short stance, but some others find the slightly longer wheelbase make sliding easier. The shorter wheelbase and wide nose mean you can get right up on top of the front truck. This makes you more stable and, combined with the width and concave, give you massive amounts of leverage. 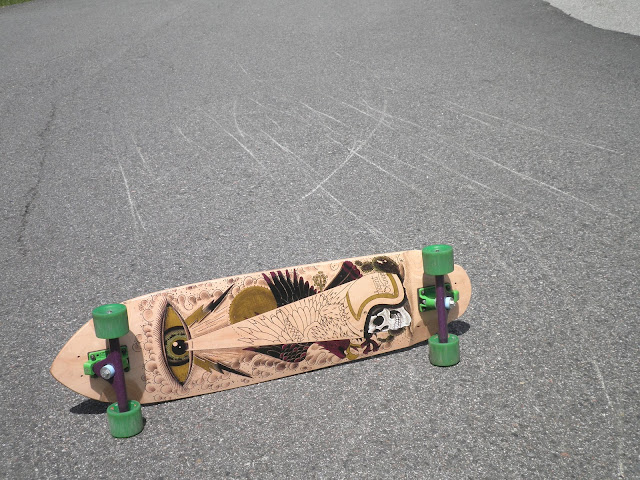 Speaking of the concave, I find it to very comfortable. It’s not super mellow like the Comet Voodoo series, but it isn’t super aggressive. It’s definitely there, but it does not make the board uncomfortable for pushing. I have really small feet, so concaves probably feel different to me than other people, but this is one of the few I’ve stood on that instantly felt right. The only others that have for me are Incline cave and Bustin EQ cave. I’ve heard that the board is pressed in the same concave mold as the Earthwing Supermodel, which has a concave that gets progressively steeper towards the edges. I’m not sure if it is actually pressed in that mold, but it does feel like it could be. The concave doesn’t feel quite as extreme though because the board is narrower, particularly in the back. The middle of the deck feels flat enough for comfortable pushing, with no W. While there may be no W or concave-killing gas pedals, the rails are pretty sharp (only rounded enough for you to not cut yourself), so dig your heel in or monkey-toe that slide.

The board doesn’t have any noticeable flex for me. It’s only 8 ply, which keeps it fairly light, unlike the 1,140,593 ply Evo or 10 ply Greaseshark. The shorter wheelbase and concave seem to keep it stiff. I have ridden a lot of 9 ply boards that have more flex. A lot of people get sketched out about riding a shorter wheelbase faster because short wheelbases are less stable, but I certainly feel more stable on a smaller, stiff board than a longer one with a little flex. Topmounts are supposedly less stable too, but the Agent Orange makes up for that with grip, huge foot platforms, and the leverage to turn hard or kick out a slide.

So the Agent Orange excels at going around corners rather quickly, but is it any good at going slow? Some speedboards, such as the Evo, feel good going fast and absolutely dead at lower speeds. A lot of this depends on truck and bushing setups, but the Agent Orange can actually be fun at lower speeds. Being a topmount, it isn’t the easiest board to push, but with the right truck and bushing setup it can be super carvy. Like I said before, the concave isn’t so aggressive that pushing is uncomfortable on your feet; it’s just more work because you have to bend your knee more. On the other hand, getting used to footbraking on a topmount makes you able to footbrake from any speed on a drop-through or drop-platform deck. It also isn’t exactly a freestyle board, but the nose and tail are pretty functional, especially on the shorter wheelbase. Tricks involving the nose and tail are obviously a lot easier on something lighter with kicks such as a Tan Tien, but they’re not too difficult on the AO. The nose and tail are about as functional as those on an Apex 37, which is much more of a freestyle board. Being a good downhill board, it is also a good freeride board when setup for slidey freeride action. 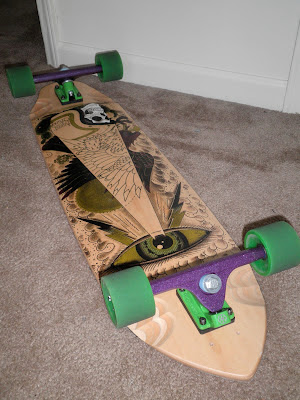 I have noticed a few weaknesses of the board. First, the sharp rails get torn up pretty easily. I’ve had the board come out and flip over during faster slides (due to lack of skill/practice and nasty pavement) and the rails got pretty scraped up fast. This is particularly a problem at the back wheelwells right before the cutouts, as the board is only a couple plys thick and that’s the highest area on the back of the board. I can’t comment as to how the board stands up to being curbed, as most of the roads I skate don’t have curbs (sometimes they have cliffs to fall off though). The sweet graphic also comes off pretty easily.

I also experienced my board warping after a couple months. I hadn’t ridden it in the wet and I had only owned it over the colder months so no hot trunks to warp it. I took a couple pictures and emailed Bombsquad explaining the situation. Within 30 minutes, I got an apologetic response asking for my address to send a new one. No requests to send the board in for examination, just an apology and offer for a new one. This is why I would buy another board from them. If there’s a problem, they’ll fix it as quickly as possible.

As far as set-ups go, I’ve tried Paris, Randals, and Gunmetals on the board. I’ve messed around with all the wheelbase options and some different baseplate angles. I enjoyed the board the whole time, but my two favorite setups were split angle Paris and 46* Gunmetals. I ran the Paris with a 50* front and the rear at 42-43*. With the fat nose that lets you get your front foot right up by the front truck, it works well having the front do more of the turning while the back grips and stays stable. I really like the Gunmetals because I find 46* to be a great middle ground for stability and lean at high speeds and carvy fun at low speeds. I can cruise and carve around at pushing speeds and do 40mph+ runs without messing with anything. Both of these truck setups gave me more confidence than others that I could go faster than I’d ever been before while still being able to turn quickly when I needed to.

Talking trucks brings up another question, “What about the dreaded topmount wheelbite?” Well, the wheelwells are super deep, as in they go into the third ply from the top, almost through it at the deepest point. The only problem is that they are not particularly long. They match up perfectly with Randals and worked well with Paris (I could run ~75mm wheels with double cones sloppy loose with only a shockpad). I have had wheelbite issues with my Gunmetals though. Gunmetal v2s will lean forever though (I get about the same turning circle with the Gunmetals as a Paris or 50* Randal on the same bushing setup due to leaning so far, despite getting less turn from the lower angle). The 46s are ¼ inch lower than Paris trucks, which is good because I needed ¼ inch riser to get clearance without running tighter trucks or harder bushings than I like. Gunmetals shorten the wheelbase just enough that the deepest point of the wells is not where the wheel hits. This is really just an issue because I like soft barrels and the inner wheelbase with super leany trucks that don’t quite work with it. A fatcone or venom freeride shaped bushing would probably fix the problem too. I have no doubt that Bears or Charger IIs would have no wheelbite issues on the board. Supposedly 50 Calibers work fine as well, but I would imagine the 44s would have problems on the shortest wheelbase, but be fine on the longest option. 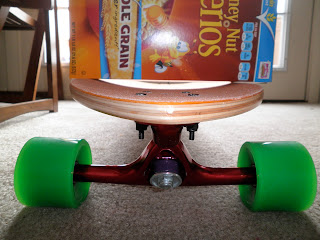 All in all, I really like this board and will probably continue to ride it for a long time. As much as I enjoy other boards, this is what I feel most comfortable on going fast. The only wobbles I’ve gotten on my current set-up were due to flatspots on the front wheels causing vibrations at 35-40 in a turn. While I love the ease of pushing and sliding drop-throughs, I won’t take anything else as fast as I do my Agent Orange. The shape is just so simple and functional. The only addition I’ve made so far has been a little Vicious 3D concave pocket/reference point for my back foot in a tuck to give myself something to push against, making tucking easier. My current favorite setup is below, although I’m thinking about going back to split angles with a slightly larger split soon. Maybe I’ll try more like 50/40 or 46/35 and mess with the wheelbase options again. The variety of setups this board works well with is only made even more tunable by the multiple mounting holes.


Thanks for the great Review Matt! You rock my socks!
Wayne
Posted by Wayne at 7:33 PM