She is an Awesome Skater... for a Girl 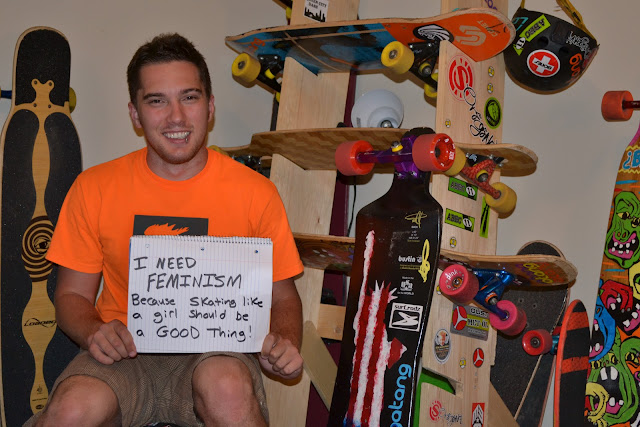 Recently there has been a campaign around the UNC Chapel Hill campus aiming to de-radicalize feminism called Who Needs Feminism? The reason being that when most people think of a feminist they think of a girl with a bald head, hairy armpits, and who hates men. However, the majority of the people reading this blog are probably feminists without knowing it or even knowing what feminism really means. Feminists don't hate men, in fact they want men to become feminists just as much as they want women to! What feminists really want is for women to have all the opportunities in life that are given to men, often times without even thinking about it. This campaign inspired me to write this article.

If you are like me and stalk the depths of longboarding on the internet then you might have noticed that there has been a recent upwelling of exclusively female content popping up all over the place. These girls can skate with the best and their pictures and videos are sick. However, all too often I hear the phrase… “Dude, she can shred! Well, for a girl.” Which sucks because by saying that you are putting these ladies in a box.

When you say that someone can skate great “for a girl” what you are really saying is that you think girls are inherently worse at skating than boys. You are also saying that it is unusual, surprising, and downright shocking when you see a girl who can skate well. But why do you find it so crazy when a girl can shred?

The response most people give me is that girls generally aren’t as good at sports. While that may hold true for sports which strictly require a specific body type, like height for basketball or weight for football, skateboarders aren’t generally huge, in fact they’re normally pretty thin. Body weight might be a factor in downhill racing but other types of skating, like freestyle, should be unaffected. Really the average body type of a female and male skateboarder isn’t too different. So what really makes people think less of the abilities of female riders?

Another point people like to bring up to me is that there are way more professional skaters who are guys than girls. To that I remind them that something else to keep in mind are the numbers behind the scenes here. Of all the best skaters in the world more of them are probably guys. Why? Well let’s think about how many people you know who skate. Think about how many you know who skate religiously, all the time, now ask yourself how many of those hardcore skaters are girls? My guess is that the vast majority of people you know who skate all the time are guys. Less female skaters mean it’s less likely for them to get really good. Let’s one out of every 100 skaters has a chance to go pro, but odds are that 80 to 90% of those skaters are dudes, so the odds of a female going pro aren’t as high. This isn’t because girls can’t skate but because there just aren’t as many ladies on skateboards out there. So if this isn’t the reason then why is it that people find it so absurd when women can skate just as good as the guys?

Well, the long and short of it is that it’s straight up sexism. A bunch of people like to jump down my throat when I say this, but I’m not saying that you’re a sexist or that you are deliberately belittling women. It’s honestly a 100% societal thing. We put girls on skateboards in this box, the expectation of them not being as good as guys, without even realizing it. Society places these expectations and limitations on girls all the time, it’s why they don’t get paid as much for the same job, are judged for wanting a career before children, any number of things. Sexism is unfortunately alive and well in our world and the best way to fight it is with a little knowledge.

It may seem silly to talk about sexism in skateboarding because it’s really just a hobby for people of all skill levels. I don’t think that sexism in longboarding is the most pressing issue facing society, but I do think that it is important that we realize what’s happening. A little knowledge can go a long way and as my good friend G.I. Joe always says “Now you know, and knowing is half the battle!” Remember, in reality girls can skate just as well as guys who are equally dedicated to the sport. So make sure you don’t just dismiss the ladies of longboarding and their ability to shred. Learn from each other and develop your skate-tastic skills even further and of course be stoked.

Email ThisBlogThis!Share to TwitterShare to FacebookShare to Pinterest
Labels: Culture