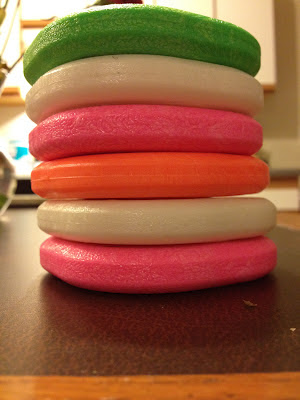 I have been known to write the occasional review on longboard related gear and I have hit decks, trucks, wheels, ect... well today I have something special lined up for you, my first ever slide puck review! Holesom was awesome enough to send me over some super awesome pucks to try out and I have been putting them through the motions of every day use. 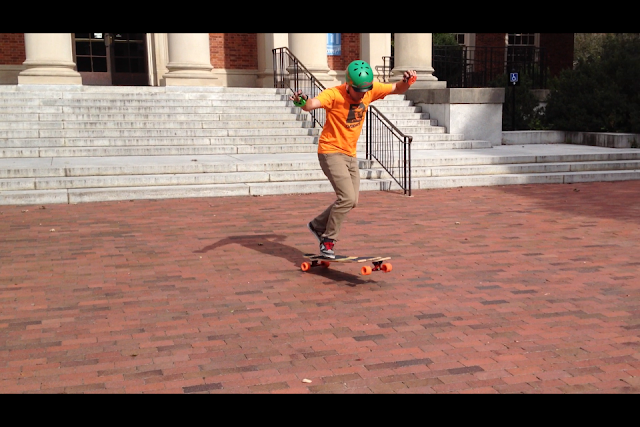 People who skate with me regularly know a few things about me:
1) I skate every day possible
2) I love standing slides
3) I am actually not too good at glove slides

Well one of those facts has recently changed! I have been practicing up with new Holesom pucks and have picked up a few glove slide to add to my arsenal of skate knowledge.
Now, enough about me, this is a review after all so let me talk about Holesom slide pucks. 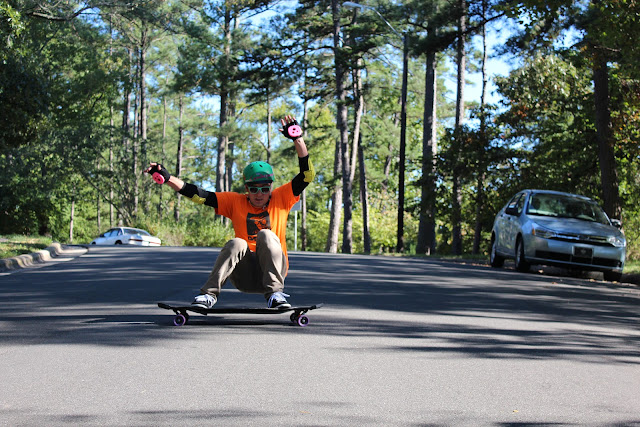 The first thing I want to touch on is just how damn stylish these pucks are. The Holesom logo is built into them (which has a purpose we will talk about shortly) with three holes in the pucks which immediately sets them apart from every other puck on the market. In addition they also come in a whole bunch of awesome colors from brown to pink to glow in the dark which also sets them apart from other pucks which are predominantly black. However where Holesom pucks really get the most points for uniqueness is that they are SCENTED! Yes you heard me correctly these pucks actually have different flavored smells (my favorite are the bubblegum ones). 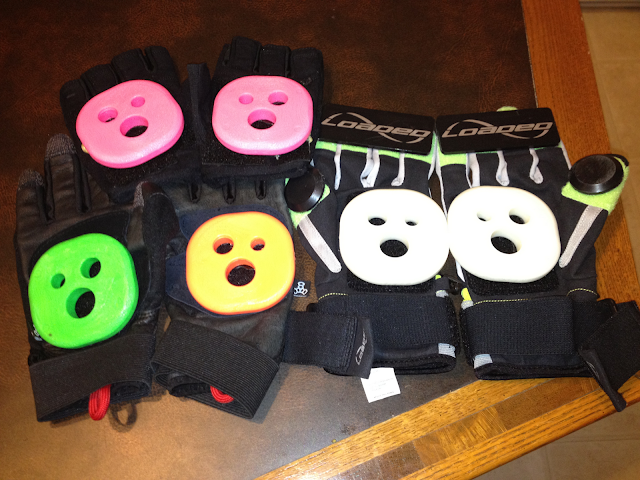 Alright, I know what you're thinking now, "these pucks sure do look nice, they even smell nice, but do they perform just as nicely?"
The answers is a definite yes. Holesom pucks are kind of spectacular for a few reasons beyond their smell. 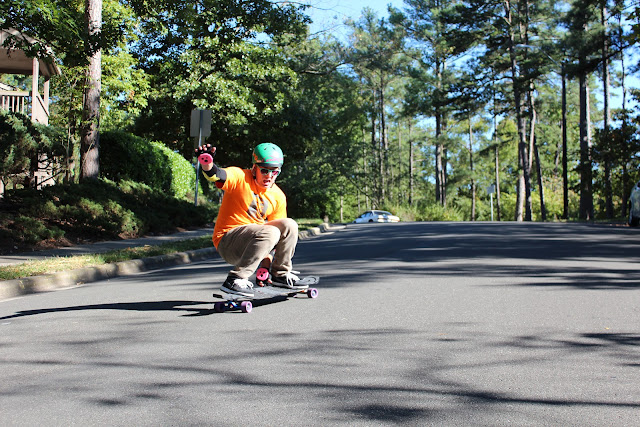 The first reason is that they don't wear down very fast. I have taken my Holesom pucks on everything from super smoother fresh pavement to old janky cheese grater pavement and they have rose to the challenge. The pucks I use the most often still look brand new and still smell great. The formula used in these pucks is quite resistant to scratching or wearing down and I really like that. 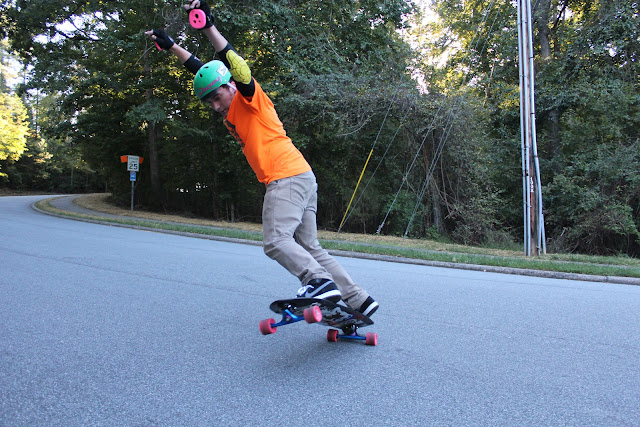 The second reason they rock is that those holes I talked about earlier are awesome. The website says that the holes are in the pucks for less resistance when they hit the pavement. I initially thought that there really couldn't be that much of a difference between pucks with holes in them and pucks without. Therefore, I put them to the test. 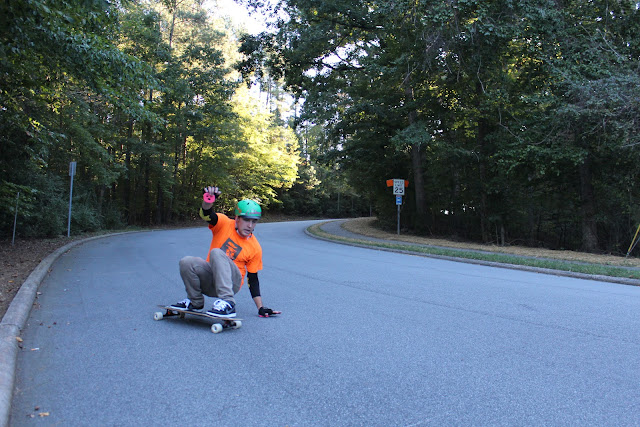 I set up a pair of gloves with Holesom pucks (which have holes in them) and a pair of gloves with regular pucks (which don't holes in them) and took them to a favorite hill. To test them I chose a spot on that hill to start at each time and rode down without pushing so that only gravity gave me momentum. Then I executed a glove slide with each type of puck. I did that a whole whole bunch of times and in the end I came to the conclusion that Holesom pucks actually do offer up less resistance then regular pucks because I slid further each time. 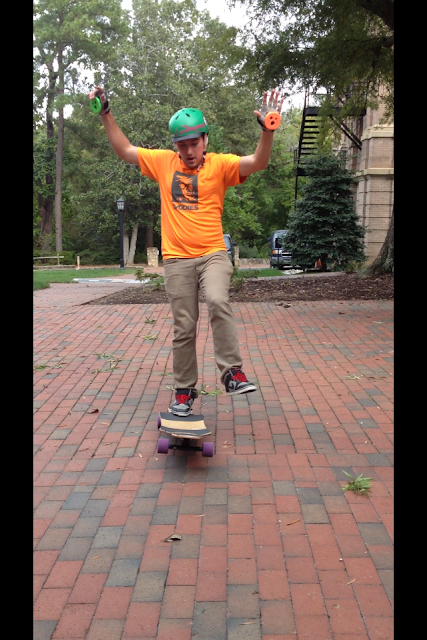 The final thing I wanted to touch on about Holesom slide pucks are the confidence they add to my rides. I didn't really ride with gloves that often before I got these pucks (hence why I couldn't glove slide) but now I ride with them every time I go out to skate. I do so because having gloves on helps keep you safe and whether consciously or not you are more confident when you know that you are riding safe. There is just something about knowing that if you fall while hitting a big standy you will have something safe to land on that is very comforting. 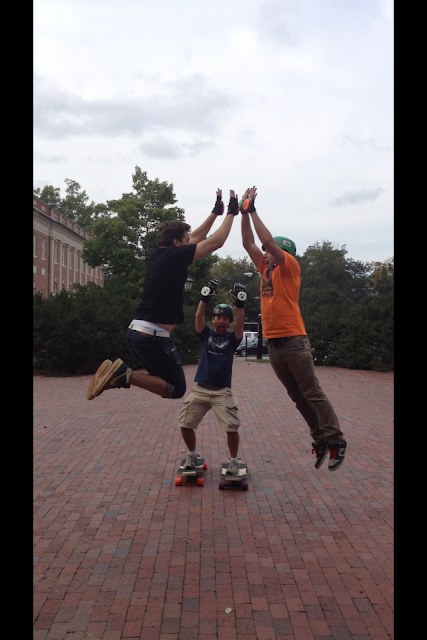 Would I recommend Holesom slide pucks to a friend?
I would do so in a heartbeat. They keep you safe, they look great, they handle very well, and to top all of that off they even smell nice. I honestly cannot think of a bad thing to say about Holesom pucks. Their great reputation is well earned and I know that anyone who picks up a set will not be disappointed.

Thanks for reading!
Any questions, comments, concerns, recipes, hatemail?
Send it my way!!!
Thanks, and Stay Awesome,
Wayne
Posted by Wayne at 3:05 PM