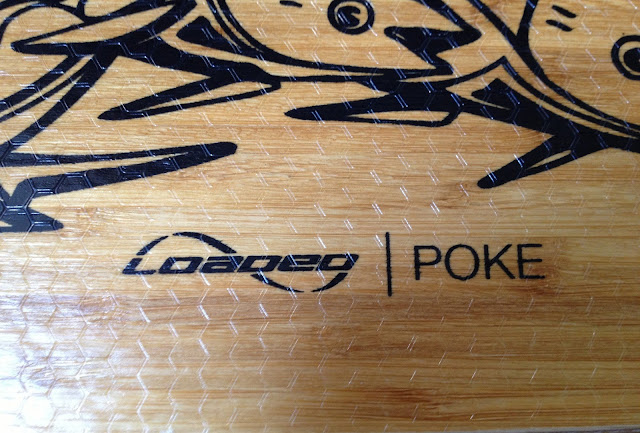 Hello My Students of Shred,
Very recently, on May 1st to be exact, Loaded Boards added another deck to its offerings. The new board is called the Poke, which is pronounced "Pokē," and is a reincarnation of the Ceviche which was a reincarnation of its predecessor the fish. I believe this newest version blows the older ones out of the water, but we will get into that later... The Poke was designed to be a conqueror of cities in a tight, light, compact, and functional package. 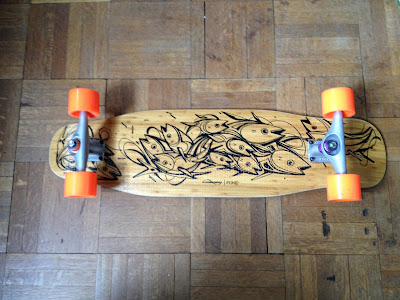 Let's get into the nitty gritty of what makes the Poke the board it is today, with its technical specifications: 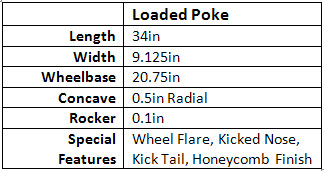 Alright, well now we know a little about what the Poke was designed for and what its specs are, but how does all information stack up against real world situations? 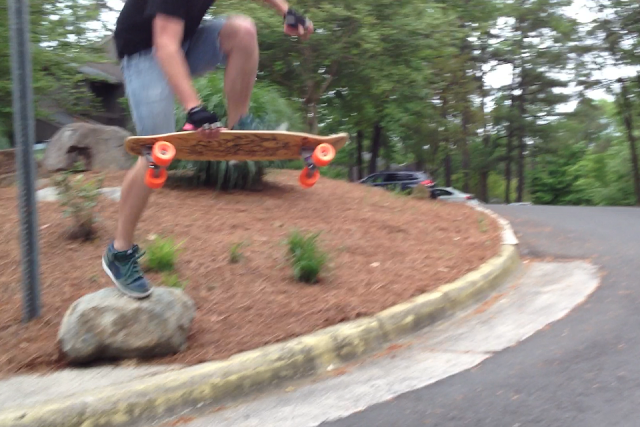 Downhill
I think that the folks over at Loaded would be some of the first people to tell you that the Poke is not intended for downhill use. However, since I always review things in a variety of riding styles, I took the Poke kind of fast. Now I'm not a silly, so I didn't try and break any records on it, but I cruised down some of my favorite runs on the Poke a few times. 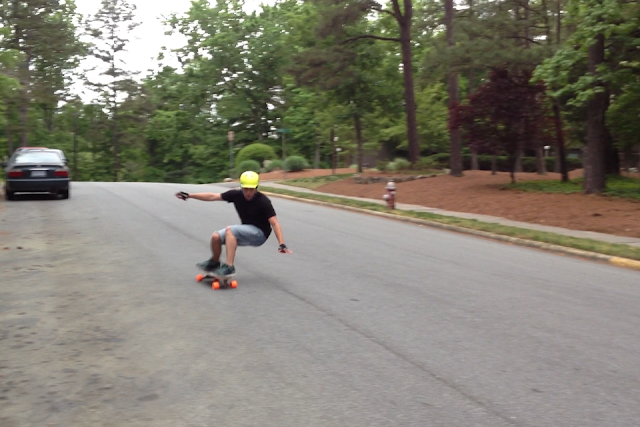 When I took the Poke to "downhill" it was rocking Paris 150mm trucks and Orangatang FatFree 80a wheels. Not exactly the best setup to haul ass with but the sketchyness certainly made for an interesting ride. I have to admit that despite its teeny-tiny wheelbase the Poke was not as unstable as I thought it would be. The subtle wheel flares and tiny bit of rocker allow you to feel pretty locked in for such a little deck. One of the biggest ways in which the Poke is awesomer than the Ceviche is the larger platform, which is definitely a bonus when going down a hill. 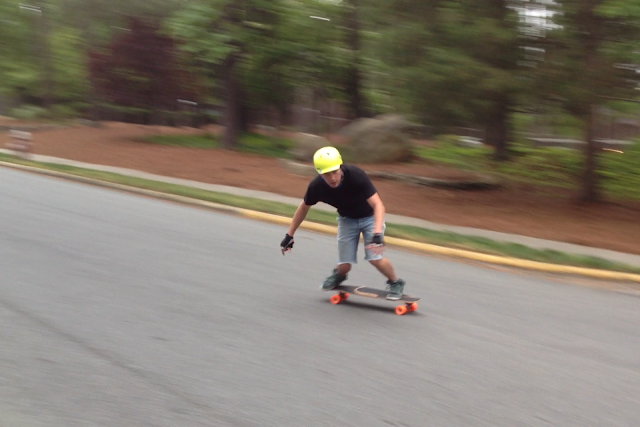 Freeride
The Poke is a really fun thrasher to hit some lower speed freeride with. I like playing with slides on this deck a lot because the small size of the board paired with its sizable kicktail really lets you play with the terrain, like all those sidewalks on your local hills. 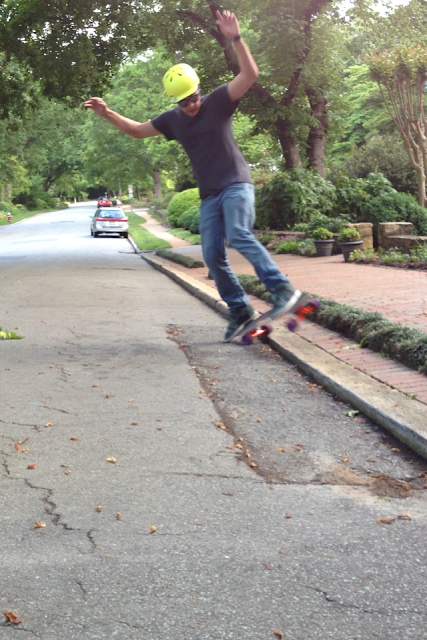 I don't think you're really going to want to hit slides while going like 40mph on the Poke, however, spinning with 180 slides and some quick technical slides are just a treat on this deck. The blunt slide has become one of my favorite "go to" tricks lately and they are oh so fun on the Poke. The kicktail really cradles your foot at all times which makes it very easy to pump from your tail, drop a curb, manual, and then hit nice little wheely slide without ever having to re-position you foot. 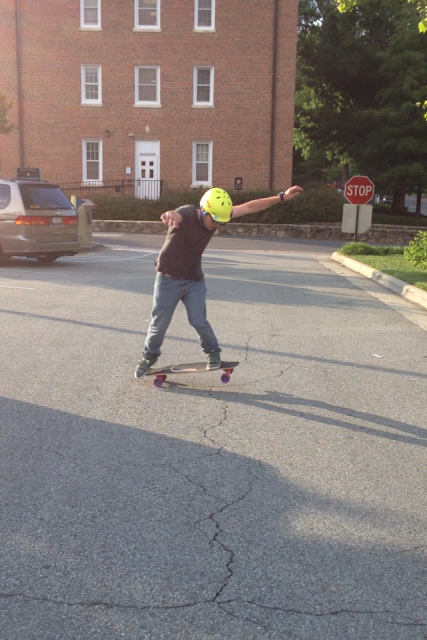 The kicks on the Poke are a very obvious feature with clear benefits without ever having stepped foot on the board. Something a little less obvious, but that I found to be nearly as crucial, are the wheels flares on this deck. Generally when I think of wheel flares I think of something that commands your attention (like those on the Loaded Kanthaka) but the flares on the Poke are tiny and almost easy to look over; that is, until you actually step on the deck. They are very subtle but you can definitely feel them under your feet and they help lock you in a surprising amount when carving hard or hitting a slide.

Commute
While Mr. Poke can be sketchy-fun on the hills and thrasher-fun while freeriding; commuting is actually one of the Poke's strongest disciplines. I generally don't find many top mount boards to be super strong in the commuting category because pushing a top mount for a long time gets tiring. That would be true of the Poke too... If you ever had to put your feet on the ground. 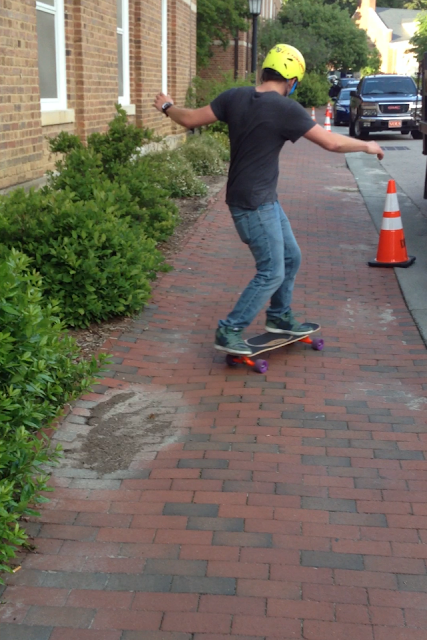 I have been testing the Poke on a variety of setups and on all of them I can pump for freaking days without laying so much as a toe on the ground. I'll get more into setups later, but on my Carver Trucks I can pump from the platform so hard that I can literally pump up and over small hills. When I rockParis trucks I just hop on the tail and tick-tack my way around town, again, never ever having to put my feetsies on the earth. I have to admit it is a ton of fun to skate this way. 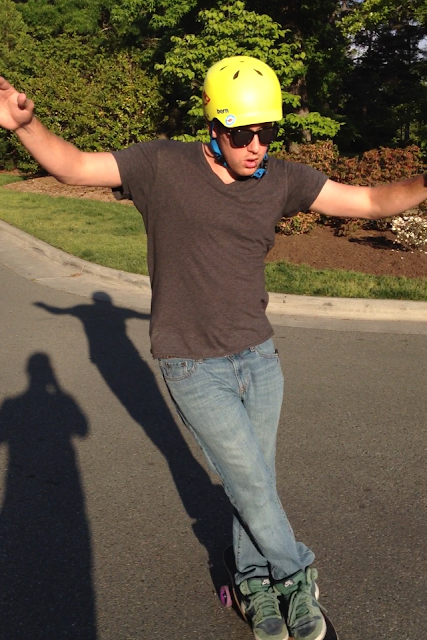 In addition to be able to pump around via tick-tack the tail on the Poke is good for something else when commuting; getting airborne. You can use the tail to hop over cracks in the side walk and drop curbs all day. The Poke's tail is more functional than the one of its predecessor the Ceviche because it is much easier to ollie. I'm not great at it but I have been able to ollie up a few curbs on the Poke which is an awesome feeling (especially is someone random is watching, haha). 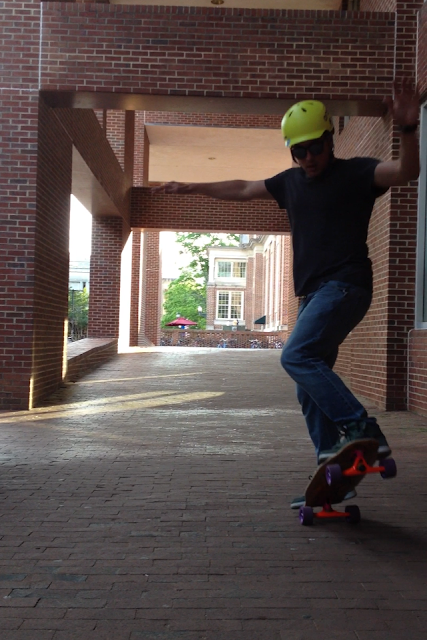 I will admit that the Poke is not my favorite board to actually push for a long time. Again, because top mounts just ride higher than most pushing boards; which are either a drop platform or a drop through board. Something that does help is the little bit of rocker on the Poke. This lowers the platform a wee bit and puts you closer to the ground. 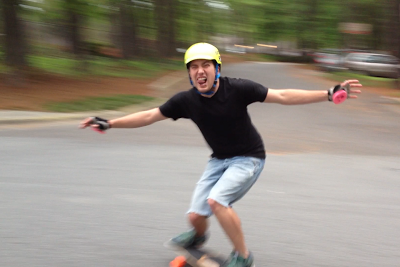 Freestyle
I don't want to say that the Poke's best trait is freestyle skating, because it is so fun for commuting too, but boy do I like to hit tricks on this board. I mentioned that the kicktail on this deck is functional enough to ollie up a curb which means that it is also nice for lots of "street" style tricks. I started skating with longboarding so I never learned a lot of the more traditional street tricks, but I am pretty freaking close to kickflipping my Poke, which I am stoked about. 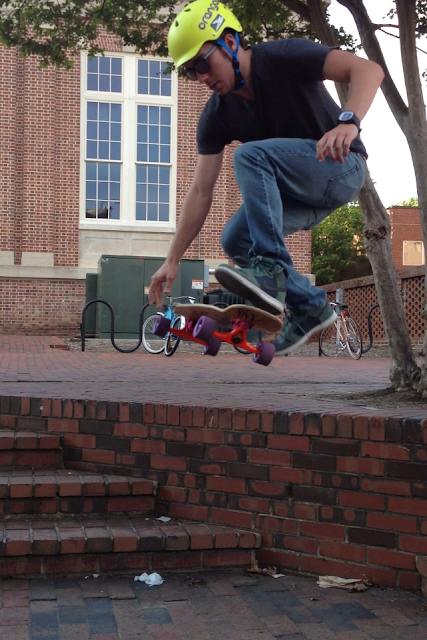 Now the Poke doesn't just have a kicked tail, obviously, it also has a nice kick in the nose too. The nose kick is great for tricks like pivots, shoves, and nose manuals (which I suck at right now, haha). I can ollie a little bit off the nose kick, but not nearly as well as I can with the more robust kick in the tail.
I mentioned that one of the biggest improvements the Poke made over its previous versions was the larger standing platform. This platform is worlds better for freestyle. It is not quite as asymmetrical as the Ceviche platform and it gives you a lot more room to land tricks. In addition if you are into board dancing the Poke's platform will suit you quite nicely, well for a smaller board. There is enough room to cross step, peter pan, even pirouette if you are accurate enough, haha. 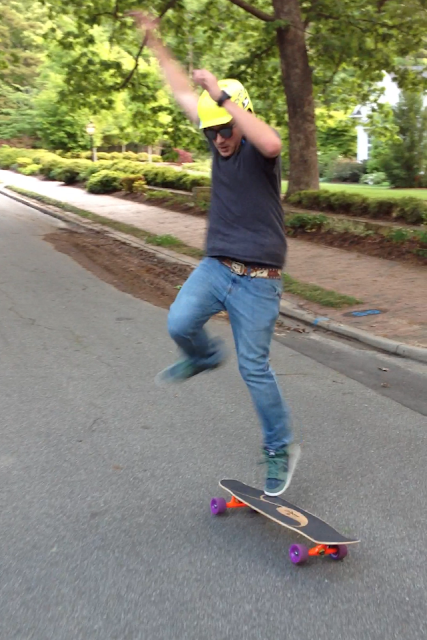 I was a little bummed that Loaded didn't add a carbon fiber layer to tail of this board like they did with the Fattail and the Kanthaka.  I feel like that would be a great way to add a little more durability to the board. However, that being said I always treat board I am reviewing terribly and intentionally try to beat them up and the Poke really isn't showing much wear in the tail. 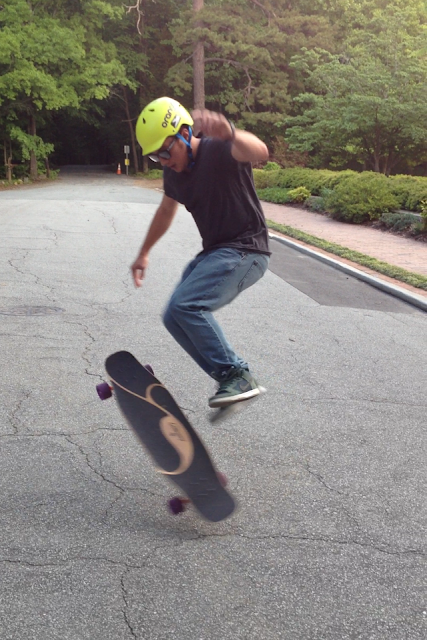 Setups
There are a couple recommended setups for Poke. I ended up receiving one of the most unique truck combinations I have ever ridden when the Poke landed on my doorstep.

Carver Trucks
The aforementioned setup is a Carver CX.4 and C2.4 truck combination. Which is a traditional kingpin truck in the back and a reverse kingpin truck in the front. This setup is really trippy at first, but after you get used to it you won't want to try anything else (at least for pumping and carving). This is the setup for pumping. I have never been able to pump a board so easily or been so freaking agile. You can turn in a complete circle in less than the space of an average parking spot. This truck combination is super fun, but really weird to ride in reverse, so if you hit a 180 slide or a shove it your ride is going to feel wonky.
For pumpy goodness I had my Carvers paired with some nice Orangatang 80a 4President wheels to get as much return possible from each carve/pump. 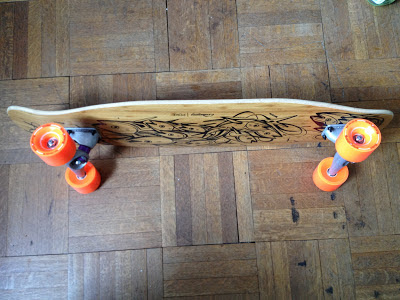 Paris 150mm
If you are someone, like myself, who really likes to hit 180 slides and tricks then you might want to consider going with a good ol' fashion set of Paris 150's. They are light and narrow which makes them great for flip tricks and spinning your board around in every direction possible. In addition you can still acutally pump the board really well with Paris trucks and some nice high rebound bushings, like Orangatang Nipples.
When rocking Paris 150's I went with a set of Orangatang 80a Fatfree wheel which are super light and easy to break into a slide.

180mm Reverse Kingpin Trucks
Slapping on a set of 180mm trucks gave Mr. Poke quite a different feel. You sacrifice a little bit of its agility for a more stable base. I really liked riding a set of Paris 180mm trucks with Orangatang Morongas on the Poke. This setup, I think, really lent itself to doing a little bit of freeride and gave me a more stable platform to stop down bigger tricks.

The Bottom Line
Would I recommend the Loaded Poke to a Friend?
I think that the Poke is a gnarly little thrasher that a ton of people would really enjoy, so yes I would. I think if you are looking for fast freeride or downhill you need to look elsewhere. Buuuut if you are looking for a fun little thrasher that can handle a variety of situations well then I would look at the  Poke. 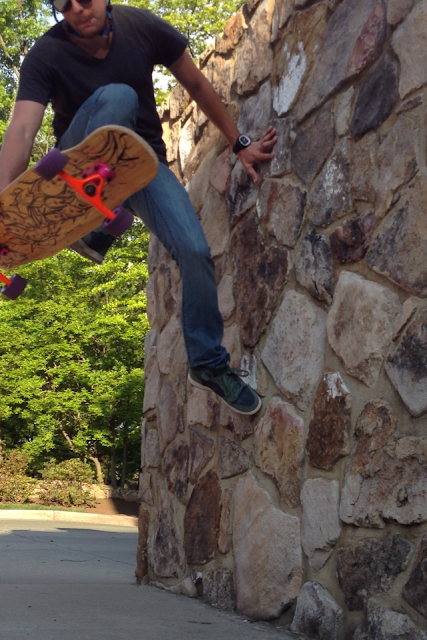 I think the Poke excels the most in both freestyle and commuting, but I don't think you need to separate the two disciplines while riding the poke. When I take the Poke to work, I'm not just pushing there, I am tricking and pumping and having a great time the whole way. My every day commute becomes an obstacle course of shred. The Poke gives you a nice marriage between freestyle and commute, I would say it is a "Free-muting" board, haha.

Thanks for Reading!!!
Have any questions, comments, concerns, hatemail, recipes, suggestions, portraits??
Send them my way!