All Up On YoFace -- Bustin Boards YoFace 39 Review 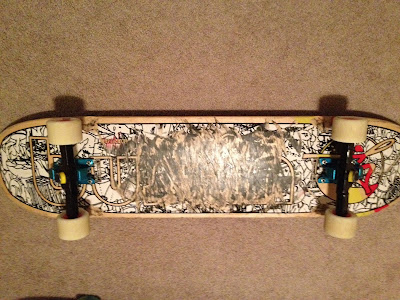 Welcome to another installment of Longboard-Life. Today we will be looking at a board that is very new to the market, in fact in just came out a week or two ago with the 2013 Bustin Boards line-up. It is a board that I have been hoping to test since its first pictures were leaked a couple of weeks ago, the Bustin YoFace 39.

Bustin boards dropped an entire Yoface family on the longboarding's lap recently with the YoFace 39 coming as the largest of the crew. The YoFace 39 is a a double kick board that was intended for a little more freeride than its smaller counterparts, the YoFace 35 and 32. I'm sure that everyone is eager to hear how this board handles on the road (or in the air) but before we get into that let's talk about the technical specifications of the YoFace 39.


Here is a link to the full description of the YoFace family as told by Bustin:
The YoFace Lineup

Normally when I review a product I go out to specifically to try it in each of what I consider to be the main disciplines of riding: Commuting, Freestyle, Downhill, and Freeride. However, for this review I went out with the board and "flowed." I just went to skate and let the day take me where ever it wanted to. I happen to have a pretty fun and diverse run right in front of my house and that is where I took most of my pictures. Then I kept on moving into town and onto campus to hit more of my favorite spots. All in all a great day. 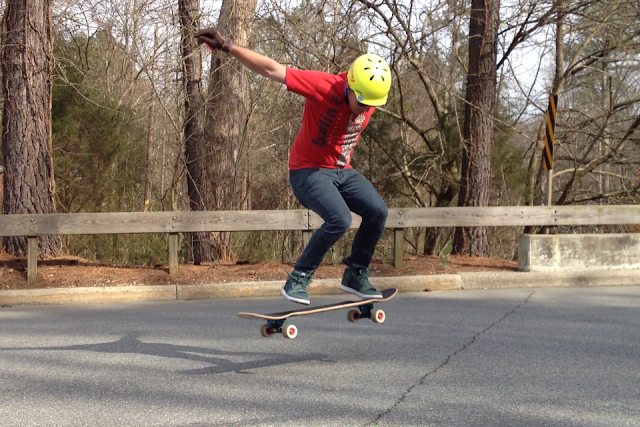 Although I reviewed the YoFace 39 in a different way than I normally do, I still have my write up nice and organized for you readers. You're Welcome.

Commuting:
The biggest of the Yofaces is a pretty fun board to roll around town with. It is not too heavy, like a 8479870 ply freeride board normally is, and it is pretty nimble. The best part about commuting on the YoFace 39 is definitely the kicktails. The kicks on this deck are large and in charge and ready to ollie. Before I started riding this deck I would hop off a curb or maybe a two stair is I was feeling bold. Now, however, I am dropping 3 stairs like it's my job, even a four stair every now then! Which makes me feel all sorts of badass. 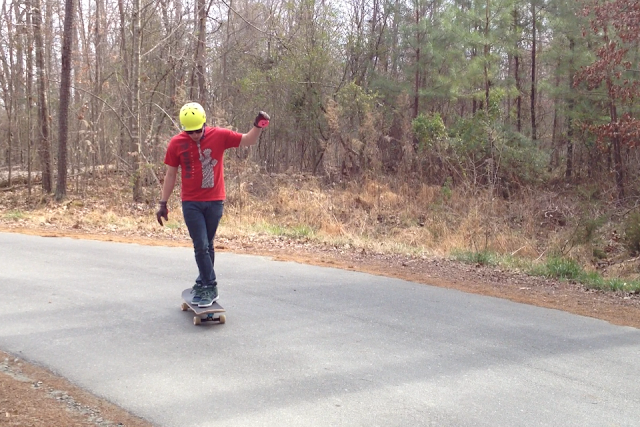 That being said the board rides a little bit high for commuting in my opinion. Maybe it's just because I am used to riding decks with drop through or a drop platform, I don't know, haha. But additionally I had to run tiny little 1/4 inch risers on my setup to ensure that I wouldn't get wheelbite (with RKPs) which put it ever so slightly higher up off the ground. Don't get me wrong, I'm not saying it is not UNcomfortably tall to skate, but after a mile or two of straight pushing you really start to feel the burn in your legs.

Downhill
Even though the YoFace 39 is the largest of the YoFace bunch, and should therefore be the best at downhill, I didn't feel super confident going too fast on this board. I think that it may come down to preference though because the board does have some features that should allow it to get going pretty fast. 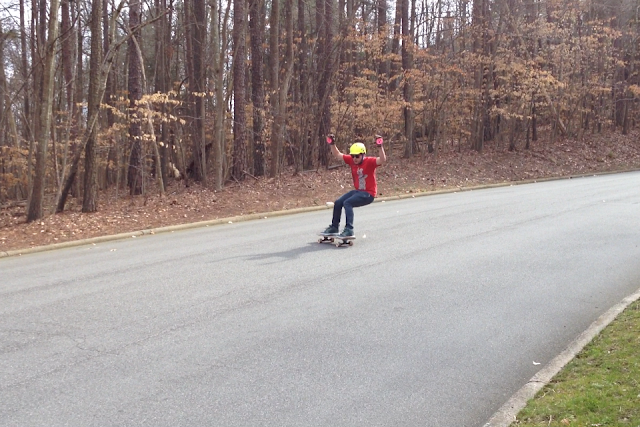 The YoFace 39 has little to no flex, despite its thin profile, and it has very comfy concave. Both of which generally translate to a board that is ready to hit some serious speed. I took my YoFace to about 35mph a few times that was about the limit of where I felt confident. However, in those few downhill endeavors I did notice something kind of cool. When putting myself into a tuck position I found that the wheel flares provided a nice spot to put your back foot up against.

Freeride
Alright, I'm going to be honest with you. The Yoface 39 surprised me. Before riding it I thought it would be a pretty fun board to freeride but it turned out to be a fantastic board to hit dem slides with. The concave on the YoFace is not really something to write home about, coming in at only .375in or just over 1/3in, it is not incredibly-deep-lock-you-in-concave. 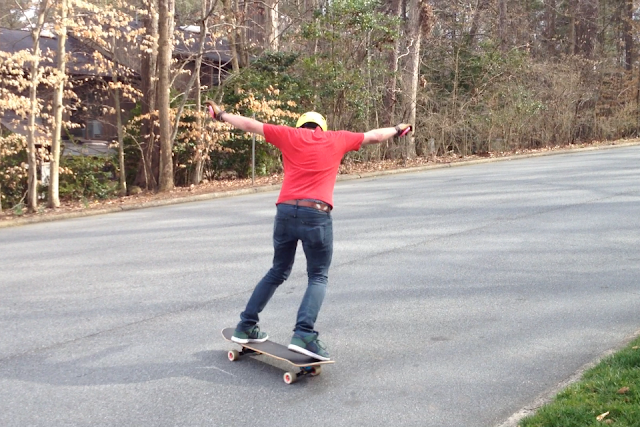 However it is not the concave on the YoFace 39 that you really rely on to hold you in during slides. It is actually the wheel flares. The YoFace line rocks what are called integrated wheel wells, which essentially means that the boards have wheel wells that are created by molding the board rather than just sanding it. These wheel wells give your feet a nice place to plant and lock in when sliding. Based on your foot position they feel comfortable with toeside and heelside slides without a problem and give you a little something more to grip onto with your feet than a flat deck would. I have been hitting some pretty serious slides on my YoFace 39 and I feel completely in control all of the time. 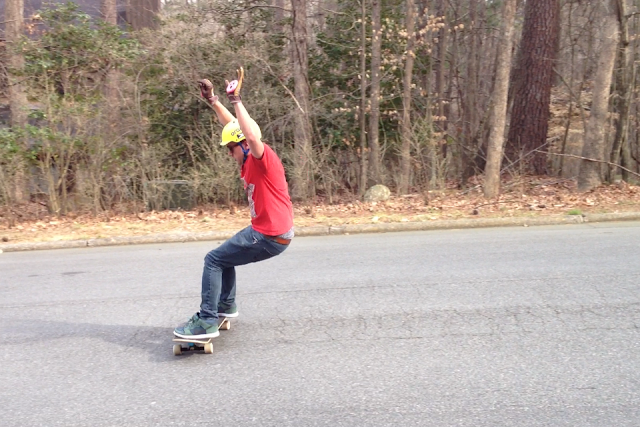 The YoFace 39 is stiff and has a pretty compact wheelbase which I think is great for throwing some big slides and for getting all spinny. The board can lock you in really nicely, as mentioned above, which most people think is awesome for holding out long long slides. However, I think people underestimate how important the right concave or features are to technical freeride. The YoFace is great for hitting 180 slides and working things like 360 slides (hard or soft wheel). 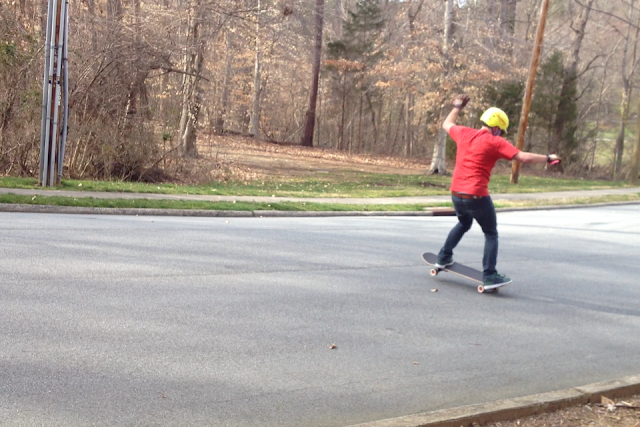 In addition, if you are trying to get all tech-y with your freeride skills, maneuvers like blunt slides and slides from the tail are made easier with continuous concave through the length of the board. Which means that even the tails of the deck have a little bit of concave to them. The tails are great for freeride fun, but let's be real, where do you think they really shine? 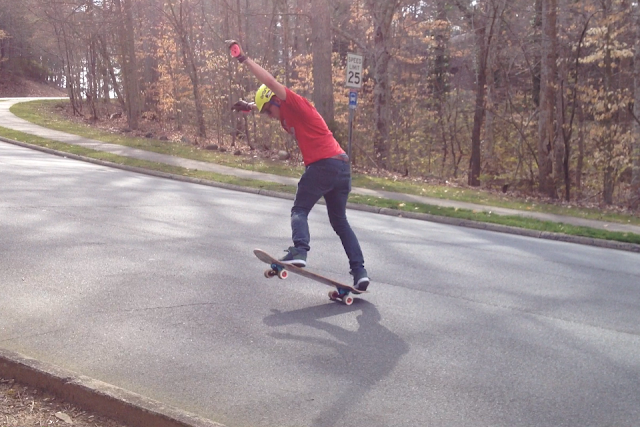 Freestyle
I think that a lot of people are really excited about the YoFace line because they are freeride friendly, however, I think that fact causes people forget that they YoFaces shine most when it comes to hitting tricks. The YoFace 39 literally begs to be freestyled real hard. 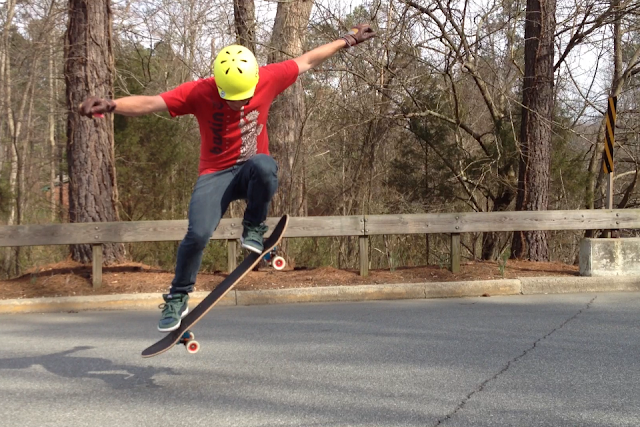 I am one of those people who never really skated growing up and I only just started a couple years back.  Oh, and I started with longboards not a standard street deck. This basically means that I never learned the tricks that you would pick up on a standard skateboard. So when I got my YoFace I started practicing some street tricks like ollies, nollies, bigspins, kickflips, ect... All of which I learned to do on a regular longboard, but let me tell you something... Every single one of those tricks is significantly easier on the YoFace. I now see why most street decks and the YoFace line share a tail shape, trickability. 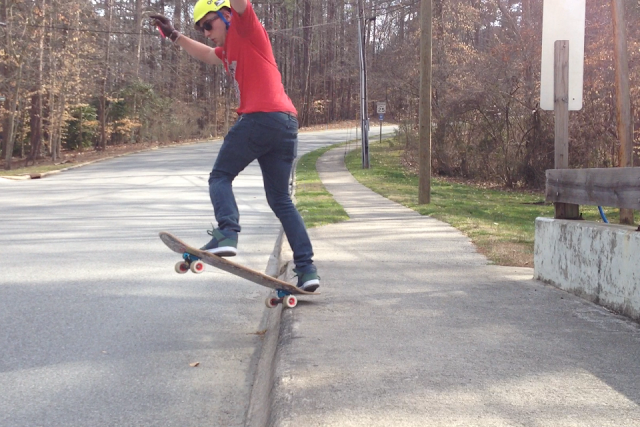 The contours of the YoFace develop quite nicely where the wheel flares and the tails meet. The unison of these two features creates what can only be described as the "manual zone." Putting your foot on this zone right between the tail and the wheel flares is a sweet sweet sweet spot for manuals. I have been using it to push my manuals longer and farther than ever. 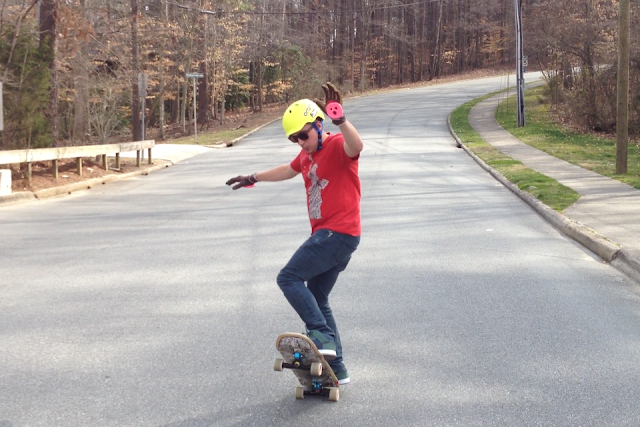 Durability
Normally when I get a deck to review it comes in one of two conditions, either brand new, or a factory second with some cosmetic damage. My YoFace 39, however, came to me a little differently. Jeff and Jonathan from Bustin were in town taking a class and after a day of skating Jeff left his Yoface 39 with me to review. It was clear that Jeff has skated the hell out of this deck already so it wasn't a pristine new board, then I took it and shredded it even further. 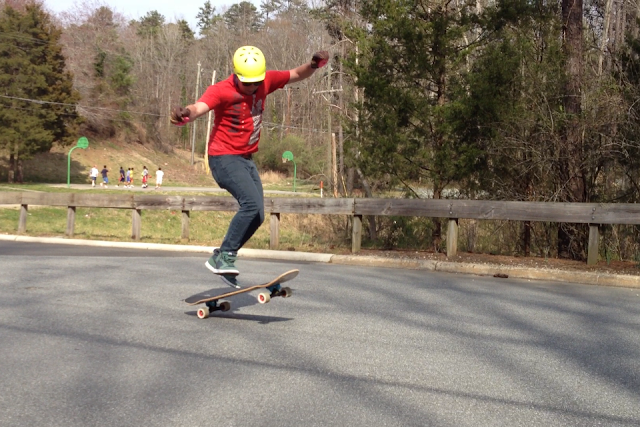 I really have to hand it to Bustin, the construction on this deck is super solid. Not only did it stand up to the beating Jeff put it through, but I have been attempting to thrash the deck and it is not any worse for the wear. Well, it's kind of ugly on the bottom from scratches and what not, but structurally it is totally fine. Even the tails are holding up wonderfully, which is great to see in a double kick board.

It Can't All Be Good...
Every product has its ups and downs and the YoFace 39 is no exception.
The biggest issue I have involved weight. The deck itself is not heavy at all for a 39in board, but the setup you are likely to have it will be heavy. I say this because I feel like the YoFace 39, in my opinion, is actually best suited to reverse kingpin trucks and 65mm-70mm wheels. All of which weigh more than you average street deck components would. This is only a downside because I feel like people see the YoFace 39 and automatically assume it is just as easy to ollie, tre-flip, ect. as a street deck and that is just not the case. The Yoface 39, despite its general appearance, it not a typical street deck and will be harder to hit street tricks on. Not impossible, just more challenging than you might initially assume.

The Bottom Line
Would I recommend the Bustin YoFace 39 to a friend?

I think that the Yoface 39 would be a welcome addition to any quiver or a great "do it all" board. I think this is especially true for skaters who are mostly interested in freeride and freestyle. This board can slide with the best of them (especially if you throw some course grip on it) due to its comfortable concave-wheel flare combination and nimble wheelbase. In addition the nasty kicks let you hit all sorts of slides from the tail and open the door to tons of freestyle opportunities. The YoFace 39 is incredibly versatile (and coming in at less than 100 bucks) I believe it will become one of the most sought after boards on the market. Tip of the hat to Bustin Boards. 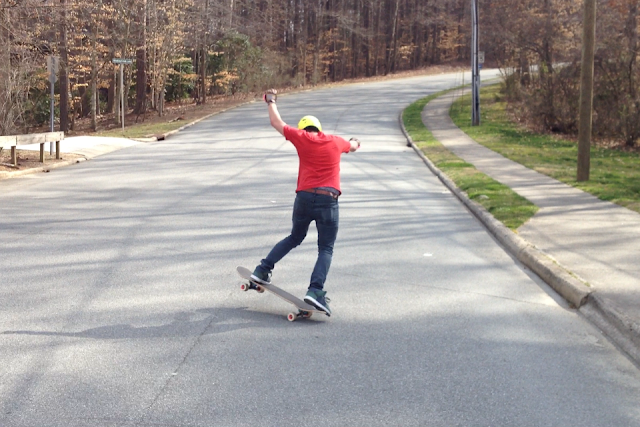 Thanks for reading!
If you have any question, comments, concerns, recipes, pictures, or hatemail, send it my way!